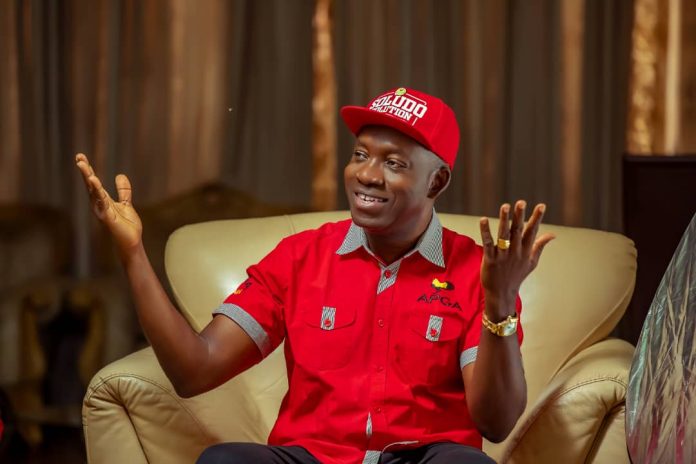 Akachukwu Nwankpo, burly, boisterous, and with a smirk, expressionless smile, comes across as a jolly good fellow. This was my takeaway of his persona, when I watched him from an observatory disposition at a retreat in Agulu, sometime last year. I saw some flashes of brilliance in some of his contributions, or so I thought.

But alas, his entry into the race for Anambra 2021 gubernatorial election has been more or less uninspiring and purposeless, for of a man with the modicum of exposure and experience God has gifted him. I was looking forward to his expected contribution in upscaling the contestations of ideas and values that will improve our democratic experience. True, I had thought he would have enriched the quality of conversations about the future of our dear State, especially how our children will do better in a world where digitalization induces split second changes.

To my dismay, Nwankpo appears to only get a lot of kicks in name dropping, sophistry, subterfuge and mind games. He employs satire and polemics as both his strategy and tactics and he is never tired of dishing out both in large doses. Poor Akachukwu!

He blackmails Governor Willie Obiano, using the name of God and or other things he believes in, distracting the good man in the process of exerting energy in the enormous and fascinating legacy projects he is speeding up to bequeath to a grateful and cheering Ndi Anambra. Anambra, home and abroad, are cheering Obiano to a strong finish, but Nwankpo won’t let us enjoy our finest moment in history, as we await the unveiling of our International Airport. He knows not that there is time for everything and a limit to politics.

Nwankpo also nibbles at Cee Cee Soludo directly or through his proxies, as if that is the only reason he is in the race. It is possible that he figures that by nibbling at Soludo with some of his willing cohorts, he would be drawing attention to himself. This tendency to use Soludo’s name to hug the limelight appears irresistible to him, and to the increasing chagrin of even his ardent supporters.

He is wrong on this score, but we will not tell him the good he is doing to Soludo.

However, we will tell him that blackmail, sophistry, subterfuge or mind games will not take him anywhere. Even a fancy office or an over-ornamented administrative building can’t help him. O yes, we shall tell Çhief Nwankpo that this campaign is a battle for the minds, souls and hearts of one of the most enterprising people on earth.

What we shall not tell Nwankpo is how Soludo has become a political Hurricane in Anambra, even if he doles out all the doughs in his vaults because this is the ace his current tactics can’t burst.

Now, if all these are like a black box to Nwankpo and his team, we can only suggest he takes the most honourable step by joining the Soludo supersonic train, after all, he alludes gleefully in public that “Soludo is my friend,” or he takes a crash programme on ‘How Not To Run An Electioneering Campaign,’ with a view to rejigging and revamping his low energy campaign organisation.

On the other hand, notwithstanding recent distress, Soludo remains inversed in consultation of APGA party faithfuls and a wide spectrum of Anambra stakeholders who continue to shower him with love and encouragement. That is the way to go. But please don’t tell Akachukwu Nwankpo.