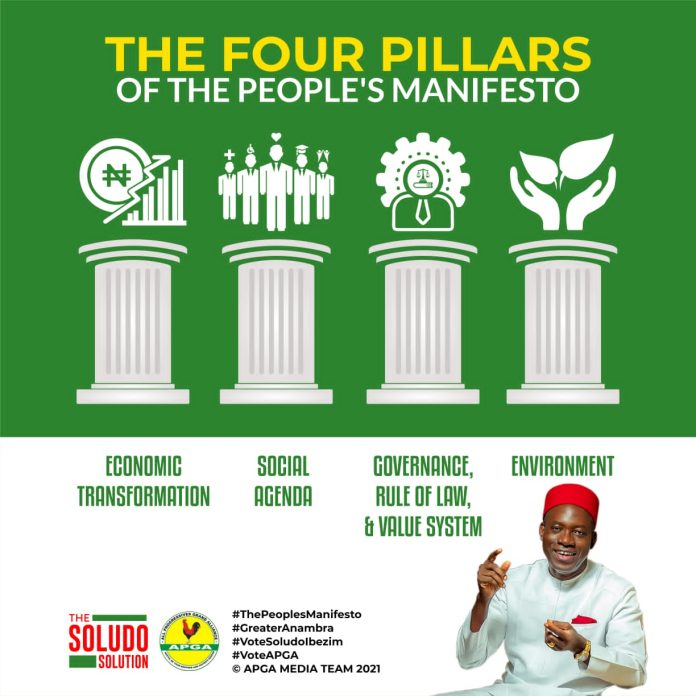 The temper of the contest for Anambra November 6, 2021 gubernatorial poll took new turns the moment Professor Charles Chukwuma Soludo emerged as the candidate of the All Progressives’ Grand Alliance, APGA. The subsequent conspiracies to undermine his candidature culminated in cloudy impetus on the courts of the land. Unfortunately, the manoeuvers ended up bruising the esteemed demeanor of the judiciary. But for the crucial intervention by relevant judicial authorities, the hallowed institution would have suffered further ridicule from coarse politicians. The concerted desperation to stop Soludo howsoever by an assemblage of disguised foot soldiers and wanton acts of violence amplifies his catalytic prime presence as APGA’s flag bearer and the candidate to beat in Anambra 2021 election.

Victory in elections in Anambra State has never really been known to come cheap. From the State House of Assembly to the gubernatorial elections, Anambra gets rattled (if not quaky) during electioneering. Anambra 2021 poll presents a crop of persons who, to various degrees, are sworn to tweaking whatever there could be to assume Anambra gubernatorial seat in March 2022. The Anambra electorate, amply armed with a clear sense of the state’s electoral experiences and the pedigrees of the present frontline actors, choose not to be unduly distracted by either the braggadocios of ‘centre-party’ or the evident vast deployment of huge sums arrogantly flaunted as juicy baits for sabotaging the peoples’ popular cause.

Charles Chukwuma Soludo’s candidature in this election elicits strong passion of acceptance from a large population of Ndi-Anambra who are enthusiastic about the envisioned mileage his administration promises to make in advancement of the state. They predicate their expectation of premium performance on Soludo’s unblemished records as a global academic and a core development economist whose international acclaim comfortably bestrides the global academia and the practical world of grooming economies of developing nations and sustaining the growth rate of advanced economies across the globe. Anambra has not been this privileged before. Ndi-Anambra converge in the common understanding that with Soludo, the most glorious time of Anambra’s march to civilization is afoot. Little wonder Governor Obiano, in justifying his unwavering preference for Soludo as his successor, presents him as one who would do a lot better than any governor Anambra has ever had.

Truly, APGA has never been more disposed to asserting its electoral supremacy than now that Soludo flies its gubernatorial flag. The sublime spirits of the likes of Dr. Chuba Okadigbo, Dr. Alex Ekwueme, Prince Arthur Eze and many more across party lines who lent support for APGA’s emergence as the voice of Ndigbo resonate today in the choice of Soludo. Truly, Soludo best fits the bill as Anambra’s governor at this most trying period in the history of Nigeria when shambolic national economy results in the social crises that increasingly diminish the sanctity of life amongst Nigerians

Charles Chukwuma Soludo’s inimitable academic records and brilliant job experiences as a renowned Economics scholar have seen him lecture in renowned institutions across the globe and consult for high profile international organizations like the United Kingdom Department for International Development (DFID), the World Bank, the United Nations Economic Commission for Africa, United Nations Development Programme (UNDP), etc. He is fellow of the Chartered Institute of Bankers of Nigeria (CIBN) and fellow of the Nigerian Economic Society (NES), just as he is member of the Initiative for Policy Dialogue (IPD). Soludo was the Chief Economic Adviser to President Obasanjo and the Chief Executive Officer of the National Planning Commission of Nigeria. He was the Governor of the Central Bank of Nigeria (CBN) and currently serves in President Muhamadu Buhari’s 8-man Economic Advisory Council (EAC). Soludo has been variously decorated as a Great Reformer by the Financial Times, London; Global Banker, London (2006); Global and African Best Central Bank Governor for three consecutive years of 2005, 2006 and 2007, Financial Times, London. He equally enjoys the recognition of Red Cross for his outstanding contributions to the development of the society (2018). The APGA candidate for the November 6, 2021 poll, Professor Charles Chukwuma Soludo, is all of these and more.

A story was told of how late Dim Chukwuemeka Odumegwu-Ojukwu, the eternal leader of APGA, was once invited to give the keynote address at an event at the Nigerian War College, during the regime of General Sani Abacha. As he was handed the microphone at the occasion, he dutifully observed the audience, noting the mixture of consternation, anxiety and excitement in their composition. In a carefully measured tone he said, ‘I understand that there have been questions and doubts about the appropriateness of my assigned role in the day’s function.’ Then taking a stern look around, as if in confirmation of his superior bearing, he bellowed, ‘If not Emeka Odumegwu-Ojukwu, who here present is better qualified for this sacred assignment?’ And in an undulating voice with mellowed timbre that bore his eternal imprimatur he addressed the topmost military officers present thusly: ‘If you were not lucky to have been instructed by me, I instructed your instructors. So why not Ikemba!’ The message sank: pedigrees and points of distinction established.

This goes to reinstate the Igbo ageless wise saying that one does not go contesting superiority in height with someone who is obviously over a head and shoulder taller than one. ‘Oda abu araro esibe ogologo!’ Truth be told; while not posting a blanket dismissal of other candidates in the November 6 election, whoever amongst them that comes a distant second behind Soludo in the poll would publicly celebrate such achievement, reminding his other colleagues that Soludo was never to be beaten and APGA, way ahead of their parties.