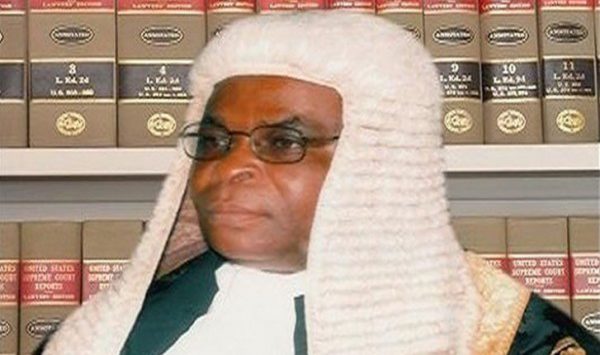 The Abuja division of the Federal High Court has stopped the Federal government from going ahead with the arraignment of the Chief Justice of Nigeria, Justice Walter Onnoghen, before the Code of Conduct Tribunal.

Justice N.E. Maha issued the interim order while ruling on two separate ex-parte applications that were moved before her.

While directing all the parties to maintain the status quo till January 17, the judge equally ordered that the defendants be served with all the processes filed and they should appear in court at the next hearing.

One of the two suits marked FHC/ABJ/CS/27/2019 was filed by incorporated ‎trustees of the Centre for Justice and Peace Initiative.

Those joined as defendants in the suit were the Attorney-General of the Federation and Minister of Justice, Mr. Abubakar Malami; the Chairman of CCT, Danladi Umar, National Judicial Council; the Inspector-General of Police, ‎Mr. Ibrahim Idris, and the Senate President, Dr. Bukola Saraki.

‎The other suit marked FHC/ABJ/CS/28/2019 was filed by the incorporated ‎trustees of the International Association of Students Economists and Management.

The suit has as defendants, Attorney-General of the Federation and Minister of Justice, Malami; the CCT, the CCB, the Chairman of CCT, Umar; and the Inspector-General of Police, ‎Idris.

Justice Onnoghen has been charged before the Code of Conduct Tribunal on a six-count criminal charge bordering on alleged non-declaration of assets.

He was, however, absent from court for his arraignment.

Justice Maha has, however. ruled that no steps should be taken in respect of the trial until January 17 when all parties to the two suits should return to court for the hearing of the plaintiffs’ motion on notice.