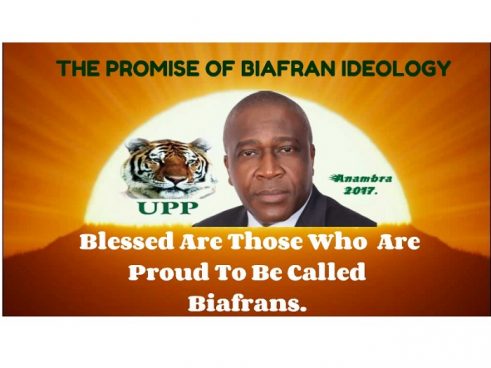 UPP is widely known to be Biafra National Party and the Man With Biafran Ideology is the choice of all Biafran people.

A group of young Igbo professionals both in Nigeria and the Diaspora under the aegis of Anambra 2017 Group has endorsed a former member of House of Representatives, Hon. Chudi Offodile, for Anambra State governorship poll.

The Anambra group, which made its position known when they visited the National Chairman of United Progressive Party (UPP), Dr. Chekwas Okorie in his Enugu residence, disclosed that they decided to form a political action committee comprising Igbo young professionals from across 68 countries of the world to change the political paradigm in the Southeast geopolitical zone.

Led by Dr. Law Mefor-Anueyiagu, the group said they want to use the forthcoming governorship poll to “ensure that Igbo do not continue in political blunders of allowing mediocre access to political office and excluding youth during elections.

Mefor told Okorie that members have been meeting via whatsapp, skype, facebook and conference calls to x-ray political developments, pointing out that his delegation was charged with the task of delivering a letter containing their resolution to endorse Offodile for the governorship poll.

He said members reached the conclusion after a rigorous background search of all governorship aspirants on the UPP platform, adding that Anambra2017group settled for UPP as party of choice for the political expression of Nd’Igbo.

In the 13 paragraph letter signed by Mefor-Anueyiagu and Dolphite Okoro, disclosed that the choice of Offodile, who was a two term member of Nigeria’s House of Representatives, was based on his ideological perspective and resonance with the aspirations of young Igbo professional for a governor that can uphold the Biafra ideology of independence, free competition, creativity and brotherly love.

The group disclosed that Offodile scored 82 percent of votes to beat other aspirants to emerge as the preferred candidate of Anambra2017 Group. Part of the letter read: “We have decided to bring to you the outcome of our painstaking search in line with the agreement reached at the preliminary meeting on February 18, 2017. With due humility and sense of responsibility, we hereby forward the name of Hon. Chudi Offodile Awolo Awka as our candidate for November 18 governorship election in Anambra State.