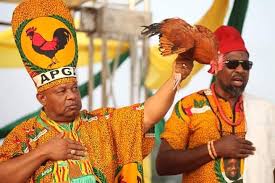 The All Progressives Grand Alliance (APGA) has been reportedly ruled out in forthcoming governorship election in Anambra State.

This development is hinged on the position of the Independent National Electoral Commission (INEC) that a faction of the party led by Victor Oye did not duly notify it of the plan to hold ward congresses ahead of the governorship poll within the 21 days recommended by its regulations and Section 85 of the Electoral Act.

INEC has communicated its position on the matter to the faction in two separate letters.

In one of the letters seen by IGBERE TV, the commission addressed its position to the principal counsel of a law firm, Omas and Partners, who had earlier written and asked for the information while relying on the provisions of the Freedom of Information Act.

The letter dated June 18, 2021 read, “This is to inform you that the commission did not receive the statutory 21 days’ notice for the nomination of APGA Anambra State governorship candidate from Victor Oye led APGA.

“Accordingly, the commission did not monitor the said ward congress and as such, there is no monitoring report of the Commission.”

The second letter which was addressed to the National Chairman of APGA also read, “Please refer to your letter dated June 16, 2021 forwarding the list of delegates for the nomination of APGA’s Governorship Candidate in the forthcoming Anambra State Governorship Election.

“Accordingly the Commission is unable to confirm if the Ad hoc Delegates list submitted by your party is the outcome of a democratic process as required by Section 87(7) of the Electoral Act 2010 (As Amended).

“The Commission wishes to emphasize the need for full compliance with all legal requirements for the conduct of Party Primaries as earlier communicated in the Commissions letter to your Party dated 3rd June 2021 (REF: INEC/DEPM/UPPM/119/1/37).”

The two letters by INEC have therefore rendered APGA’s Wednesday governorship primary an exercise in futility as the use of invalid delegate list will exclude the party from the election.

Meanwhile, the Jude Okeke-led APGA has accused suspended Oye of deliberate refusal to submit 21 days’ notice for his faction to tje commission after allegedly collecting $2m.

Oye was further accused of sealing a Senatorial ticket deal with those described as enemies of the party with a promise to help use technicalities to exclude APGA from the ballot.

The Publicity Secretary of the Okeke faction, Ikechukwu Chukwunyere, in his reaction, said the faction remains the only option and hope for APGA to have a candidate in Anambra since he dully submitted all the notices.

Chukwunyere said, “We are aware of the position of INEC on this matter.

“As disheartening as it is, there is still hope for the party.

“Although the Oye faction had missed the issuance of statutory notice, all hope is not lost if the party backs the Okeke faction.

“This is because the Okeke faction has served all valid notices for the APGA primary in Anambra.

“It is important to join hands with the factiom now if the party must take part in the election.”