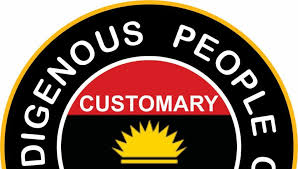 Customary Government of Indigenous People of Biafra shall join the Coalition of Northern Groups in their Suit No FHC/ABJ/CS/538/2021 and consolidate it with Suit No FHC/EN/CS/103/2019 to demand for Referendum for the Biafrans in Nigeria. It’s action time.

The Northerners have commenced a suit against the National Assembly to stop passing the Bill of Restructuring and commence the process of granting the South East the right to secede from Nigeria. It is possible that the Northern Group is trying to stop the National Assembly from voting for Devolution of Power because judicial function takes precedence over the other two arms of Government. If a matter is brought to the court, every other thing must be suspended. So, the Northerners will succeed in suspending the passing of the bill for Restructuring by Devolution of Power until their case is decided by the Court. This may be a trick by the North.

As the Northern Groups have commenced a judicial action on the matter, we shall therefore apply for joinder and consolidation so that the whole dispute between Biafra and Nigeria can be resolved at the same time. This is action time for the use of law and political diplomacy.