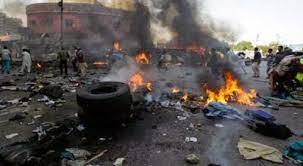 There is currently heavy tension at New Artisan, Enugu State after an alleged attempt by government officials to demolish the New Artisan Market was fiercely resisted by the Hausa traders who reportedly used Ak-47 to chase the officials away, Igbere TV has learnt.

According to report gathered, the Hausa traders seized the Government bulldozer, chased away the police that accompanied members of the Enugu State Capital Territory Development Authority.

The gun wielding traders blocked the NNPC end of the Enugu/Porthacourt expressway stopping vehicular movement just as they set up bunfires along the express.