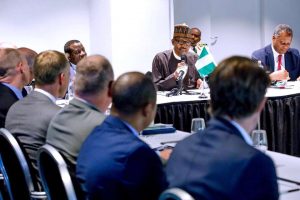 At a time several countries, including a few African countries, were contemplating quitting the International Criminal Court (ICC); we think it was quite thoughtful of the ICC to have invited President Muhammadu Buhari to deliver the keynote address on the occasion of the 20th anniversary celebration of the Court at The Hague on July 17.

The election of a “cherished son of Nigeria,” Justice Chile Eboe-Osuji, as the President of the Court, is also a great honour on the country, for which President Buhari appropriately thanked the judges.

The court needs the support of a country like Nigeria to persuade all African countries of its evenhandedness and to counter some of the specious arguments being advanced by some noted African dictators who dread accountability. As the African Union’s Champion on Anti-Corruption, President Buhari was an excellent choice, too. He also made the most of it by appealing to the ICC to “include serious cases of corruption by state actors that severely compromise the development efforts of countries and throw citizens into greater poverty.”

The primary concern of a global court like the ICC is to hold people accountable for crimes against humanity, war crimes, crimes of genocide and aggression and, as Buhari stated in his speech, the court was inspired by the famous Nuremberg trials of Second World War criminals. The court was set up to prevent impunity and punish leaders responsible for appalling crimes and atrocities while giving hope of justice to the many, Buhari said in his short but powerful speech to the Court.

President Buhari observed that there is an alarming proliferation of serious crimes around the world, a phenomenon that has increased the Court’s relevance. Commenting on the Court’s limitation of not being able to act in countries which are not members, Buhari urged the ICC to send a strong message that would be heard by both victims and perpetrators and by so doing reinforce the demand for justice. In all cases, the court must underscore the international community’s commitment to accountability and the rule of law.

“The Rome Statute created more than a court; it created the outline for a system of justice for horrific crimes rooted first in national courts doing their job, and where they fail to do so, the ICC stepping in only as ‘the court of the last resort,’” Buhari said.
He praised the court for overcoming its initial challenges in areas of financial resources and even more gravely the threats of withdrawals of membership of the Court by some States. He commended the court for addressing those challenges in a dignified and commendable way. On the way forward, he urged the court to accept all constructive criticisms, raise greater awareness, engender trust and encourage non-members to become members. He urged all states which have not done so to “accede to the Rome Statute of the International Criminal Court so that it can become a universal treaty.”

Nigeria, he said, has always supported the Court and would continue to do so out of “our strong belief in the respect for the rule of law and human rights. Nigeria is preparing to conduct a general election in 2019. Contrary to the tragic incidents that characterised the 2011 general election in Nigeria which necessitated preliminary investigations by the ICC, I assure you that all hands are on deck to prevent any recurrence of such tragic incidents. We shall do everything possible to ensure that Nigeria witnesses the conduct of free, fair and peaceful elections in 2019,” the President pledged.

We commend President Buhari for his forthright speech. He struck all the right notes and Nigerians should be proud of those policy commitments.