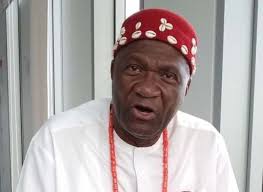 It gladdens our hearts to hear the news that our Patron and Mentor, Chief Nnia Nwodo, has been appointed as the National Coordinator of the entire South & Middlebelt Leadership Forum. Upon hearing the news, we contacted him for confirmation. He confirmed it in his own words as follows: “Very true. I least expected this!”

Below is the Notice of Appointment with the signatories:

The entire SMBLF rejoices with Chief John Nnia Nwodo as he successfully completes his service to Igbo Nation as the president of Ohanaeze Ndigbo on the 10th of January 2021. We are also glad to announce that given the values he carries our Oliver Twists want more of him and have decided to appoint him as the National Coordinator of Southern and Middle Belt Leaders Forum with effect from 10th January 2021.

He shall in that capacity assist the National Chairman of the group officially and carry out leadership functions and duties that would be assigned to him for the progress of the group from time-to-time. We trust on his sense of responsibility to handle the new task given his track record. Our prayer for him is that God will continue to imbue him with the capacity to function beyond our human expectation of him.

The promotion and appointment came to him as a surprise. The Leaders of the three Regions of the Niger Delta, South West and Middlebelt signed the Appointment based on merit as they extolled his leadership qualities. We rejoice with Chief John Nnia Nwodo and the entire South and Middlebelt Regions. We have one mission and one vision to emancipate our people from the bondage in Nigeria.

Our mission is very clear: Nigeria must be restructured by way of devolution of power to the six Regions to govern themselves as autonomous Regional Governments just like the four nations that make up the United Kingdom. Every Region shall maintain its Indigenous Identity just like the Scots, the Irish, the Welsh and the Anglo Saxons in the United Kingdom of Great Britain.

There shall be six nations in the “One Nigeria” and every nation shall be autonomous with the power to govern itself and develop at its own pace. For this reason, we have submitted our Memorandum to the National Assembly for Devolution of Power to the Regions. This is our minimum demand otherwise Nigeria shall break up and disintegrate into oblivion.