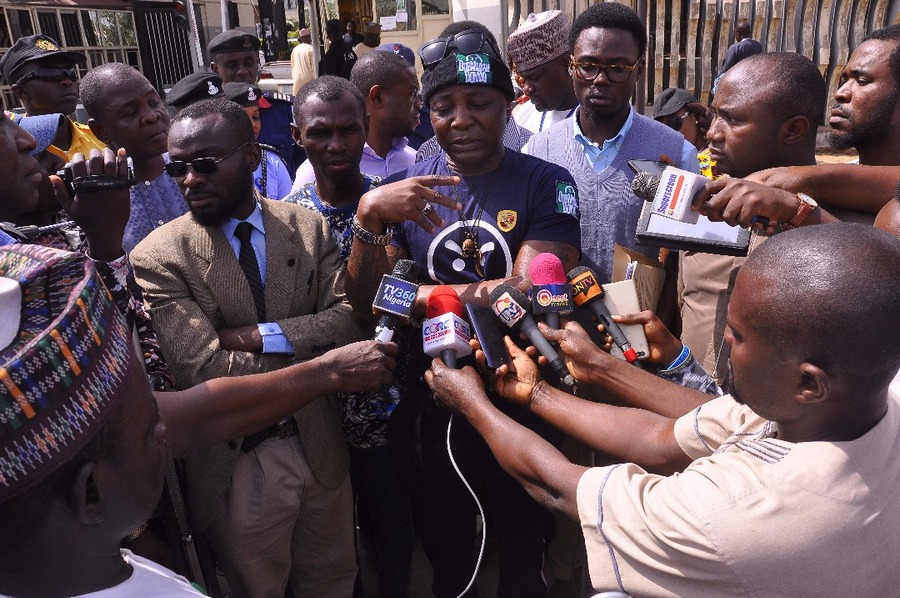 A group of good governance advocates, under the aegis of “OurMumuDonDo” on Monday, staged a peaceful protest at the National Headquarters of the Independent National Electoral Commission (INEC) over the perceived lapses in the on-going Continuous Voters’ Registration, CVR, exercise nationwide.

The group led by maverick entertainer, Charles Oputa, popularly known as Charly Boy, also condemned the active participation by underage voters in last Saturday Local Government elections in Kano and Katsina states. Speaking during the protest, Oputa said that after series of meticulous observations of the CVR exercise and interface with voters nationwide, the group felt the necessity for critical stakeholders to engage INEC on ways to remedy the deficiencies in the voters’ registration process.

He expressed the readiness of the group to partner with INEC in addressing the lapses in the on-going Continuous Voter’s Registration Exercise but warned that if the commission failed to address the issues raised in the group’s protest letter and reply within two weeks, the movement would begin its daily-sit-out at the front of INEC office in order to avert the unpleasant consequences of disenfranchising millions of Nigerians as a result of the current lapses in the registration process.

He said: “We commend INEC on some giant stride it has recorded since its formation, and space it is giving to dialogue this period on how to improve our electoral process, however, the movement wishes to engage the commission on the following challenges encumbering mass participation of the Nigerian people in the electoral process. “The challenge of voters’ registration in different parts of the country, especially with regards to the unavailability of required registration centres in most of the states in Nigeria. “The challenge of voters’ apathy and disenfranchisement as a result of the longtime practice of rigidity in the electoral process. “The challenge of conspicuous deficiencies with regards to electronic voting, the compilation of results, and accurate documentation and reportage of the number of voters nationwide.

Other speakers were Conveners of Concerned Nigerians, Deji Adeyanju; OurMumuDonDo, Raphael Adebayo; Coalition in Defence of Nigerian Democracy, Ariyo Dare Atoye; as well as Campaign for Democracy; Bako Abdul Usman and MAD Connect, Moses Paul. Adeyanju, while speaking, lampooned INEC for allowing, supervising, and accepting votes by those citizens who are yet to reach the legal age of 18 at the just concluded Local Government election in Kano State. They were received by a senior police officer, Paul Odama and Acting-Director, Security Directorate of INEC, Muse Sekpe, both of who led their representatives into the premises to personally submit the protest letter.