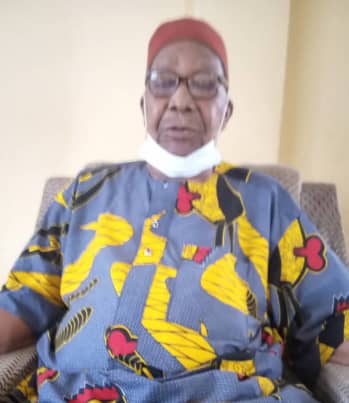 The first republic Minister of Aviation, Chief Mbazulike Amechi (Dara Akunwafor) on Wednesday dissociated himself from an online report which he called falsehood.

Chief Amechi made the clarification while speaking with journalists in his Ukpor country home in Nnewi South Local Government Area of Anambra State.

“My attention has been drawn to a bunch of falsehood which somebody put on the internet as a statement by Mbazulike Amechi saying something about government killing Igbos. The coward did not identify himself or state the media and where I made the statement.

“Since my wife died in July, I have reclined into the customary solitude of my people until after her funeral and burial which is scheduled to take place on October 28, 2021.” Chief Amechi explained.

The former Aviation Minister said that he is personally worried by the high level of violence and killings which started from about Independence day anniversary, particularly in Anambra State because it can scare away voters in the scheduled governorship election and can also adversely affect the funeral and burial of his wife.

“I am doing this as a political father of the nation and in fulfilment of a role which God expect me to play for sparing my life this long.” He noted.

Chief Amechi appealed to whoever that is responsible for what he called senseless killings and destructions to drop their weapons because peace according to him cannot be won with gun.

As true sons and daughters of Africa, you have the inherent respect for the elders, I ask you, whoever you are, to put a stop to this violence and let me bury my wife in peace and for the Anambra State governorship election to be held. If you scare away voters and only five thousand voters cast their votes, INEC will pronounce the winner and he will be sworn in to rule you for the next four years whether you like it or not.

“It is not possible to have Biafra before November 6, even if President Muhamadu Buhari gives the nod, it is not realistic, I believe in diplomacy, let the problem be solved by dialogue and diplomacy.” Chief Amechi appealed.

He however urged the South East governors to buckle up because according to the former Minister, they have not been pulling their weights.