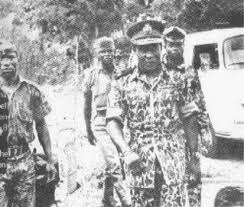 He was an Engineer minding his business in Ugwuocha now called Port Harcourt in his Electrical Power Engineering Nigerian Ltd .

He was placed in charge of Militia in Port Harcourt in 1966 and when Lt. Col Ojukwu abolished it because of Political setting behind it ,he simply went back to his Electrical business until late in May 1967 when Port Harcourt provincial Secretary Mr Nwokeke called him and ordered him to reassemble the Militia again in case there is need for them to be handy if the threat oozing out from Nigerian side become real and there is need for defending Igwe Ocha.

They started training youths with sole aim of defending Port Harcourt but nature has a way of itughari mmadu ,..the Militia under his command proved efficient and important when they crippled the ferocious blood letting Soldiers of Third Marine Division of Nigerian Army led by Dare Devil ,Lt Col Benjamin Adekunle known as Black Scorpion for his Ferociousness toward Easterners .

Black Scorpion was the man who swear and ordered his Soldiers “Shoot everything that moves in IGBOLAND and when they are finished ,shoot things that are not moving ” his aim was to have a total annihilation of IGBO as a Race ,he tried all he can but onaputanwuro okuko mkpuru akwu (He did not even rescue Palm But from a Fowl ).

After this exploit he was seconded to Enugwu to beef up that front with Militia at Enugwu and those drafted from Port Harcourt as support team ,when they landed at Enugwu and spread to Nsukka they injected strength and confidence on the Soldiers and they did curtail the Weed smoking Invaders .

All this while , Achuzia was not a Soldier, until he went to Enugwu to be enlisted ,while Lt Col Ogbugo Kalu was with his Application and supporting documents that will enrol him as officer in the Army ,that was when they launched “Operation clear Bonny Island ” back in Port Harcourt .

The night he was to be commissioned his papers got lost and never found ,so he went back to Port Harcourt but when Mid west fall he was asked to go and start Militia there and he was asked to be dressed as Military officer to give his mission a boast, he was dressed as Lt Colonel and the Head of State General Ojukwu gave him back up documents to that effect , going to Mid west gave him the Legend he was known for till date .

His Electrical company in Port Harcourt formed the Military factory of Biafran Hardwares ,where Bifrans Converted Pick Up trucks into Armoured Vehicles ,where Bullets were armed with Projectiles that were used as ROCKETS that shot down British manned Fighter planes that were deployed to cause total Genocide ,where they shoot our Churches, Schools, Markets without mercy of any kind .

Col Achuzia also known as HANNIBAL was a game changer ,he was so instrumental that where ever the invaders proved so strong ,he will be sent to same front and he will rescue the place. He was a Legend in battle field ,a Moral booster and Commander without rival .

He was so tactical that Nigerian Army swore he moves around with Charm that makes bullet to miss him ,but it was shear bravery and intelligence that guided him .

An instance was when he laid siege at Nsukka when the Weed smoking Invaders where raging ,he lied very low and still with his boys ,until the Janja Weeds entered the middle of the setting and they simply overcome the Janja weeds and take spoil of the armament that swell Biafran Armoury ,to him it was like taking a Candy from a Baby .

Not to recall the Magic feat he performed when Nigerian Soldiers wanted to invade Onuicha through Asaba and he single handedly swam under River Niger dodging hell of bullets and was able to plant the Bombs that blasted the Bridge to Hell and stopped the advancement of Murtala Muhammad who came to shoot anything that moves ,same mission with Black scorpion .

A hatred that I can’t understand till date .

As we mourn this great Hero ,I pray that history will never forget his exploit .

Through it was brought to submission and reasoning at ABURI GHANA under the supervision of Many African Head of States ,the peace was brokered between General Chukwuemeka Odumegwu Ojukwu ,a Harvard Trained Historian and Head of State of Federal Republic of Biafra and Col Yakubu Gowon a student of Quota system and head of state of Nigeria.

Both side met and agreed that to avoid blood letting that they will run a FEDERATED NATION or say Confederation setting where you develop your side with what you got in your place ,then a joint Federal Government at the center .

It was agreed ,signed and sealed but on coming back home the Brutish who came to us with Bible and preaching Love and Kindness which we embraced went to Gowon and told him that accepting that agreement will make BIAFRA EXTREMELY DEVELOPED and leaving the North poverised ,with the BBC AWUSA VERSION which Britain set up just to manipulate the minds of our own compatriots ,the deed was easy and Gowon thrashed the agreement and invaded us through Obolo AFO Nsukka with the sole aim of finishing every Male alive in South East .

Prior to the invasion ,they withdrew all the Rifles at Enugwu and leave only 125 Rifles and handful of bullets, that was why Gowon said then , that it will be Police action ,meaning they will walk in and capture all the male and walk out ,that was also why he said it will take them 48 hours but as God rose in our defence with defiance gallant University students at Nsukka who swore that we can’t be captured alive and they started defence of motherland with sticks and Catapult .

The 48 hours turned to 3 years of conflict with America and British on the side of Nigeria and God and Human Angels on the side of Biafrans the oppressed ,it took 3 solid years for us to decide that enough of the blood letting.

Before we gave up in 1970 ,we have finished the first ever THIRD WORLD developed INTER CONTINENTAL BALLISTIC Missiles called FLYING OGBUNIGWE but the God in us will not allow us to deploy it against our own and that would’ve created NAGASAKI and HIROSHIMA in Africa.

While the conflict lasted ,we proved to the World that ingenuity is in born ,we process our own oil,build our own ARMS,Refine Crude, build detachable RUNWAY, build Mobile Radio Station, Print a currency that still stands .

A feat that most African Nation cannot match even today 50 years apart and Nigeria as a Nation don’t even dream of it in the next 100 ,but moving on ..

The deed of your heart has placed a Golden OSCAR around your person .

Mazi Odera salute you and bid you well ..