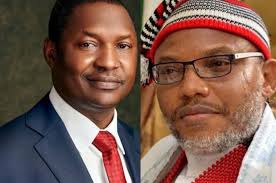 The Attorney General of the Federation (AGF) Abubakar Malami, SAN, has announced that the members of the Indigenous People Of Biafra, IPOB, aren’t allowed near the court premises when trial of their detained leader, Mazi Nnamdi Kanu continues.

Kanu who was recently abducted from Kenya to Nigeria will appear in court on July 26 to face his ongoing trial on charges of treasonable felony. He fled the country in 2017 after personnel of the Nigerian Army raided his Afaraukwu home in Abia State and killed dozens in the process.

Apart from the charge of terrorism leveled against him, fresh charges such as killing of security operatives, killing of Fulani cattle herders, banditry etc will now form parts of his offenses against the State.

Announcing the new charges to the public, Malami said Nnamdi Kanu’s case is going into another dimension as fresh charges shall be added to the already existing ones.

Speaking further he said, “What we are talking about here include murder case, terrorism, banditry and criminality. Kanu committed a heinous crime that have not been recorded in this country before like ordering IPOB to be attacking and killing innocent Fulani Cattle rearers that are only catering for their cows, killing innocent force personnel, and so many other things that make up the new charges that will be added to the already existing ones.

“We’ve also passed a signal to all IPOB Members that non of them should be seen around the court premises on the trial date of Nnamdi Kanu.

“We’ve concluded plans with the security agencies on how to deal with anyone who tries to forment trouble on that day. We don’t want to see anyone wearing IPOB T-shirt or cap near the court premises that day.

“The person entitled to be at the court is Nnamdi Kanu’s Lawyers only and the Federal Government Lawyers, also some government officials. That’s all. We don’t want the court to be over crowded on that day” the Attorney General of the Federation said.

The Senate Anti-Restructuring Vote, Biafra Agitation and the Rest of Us