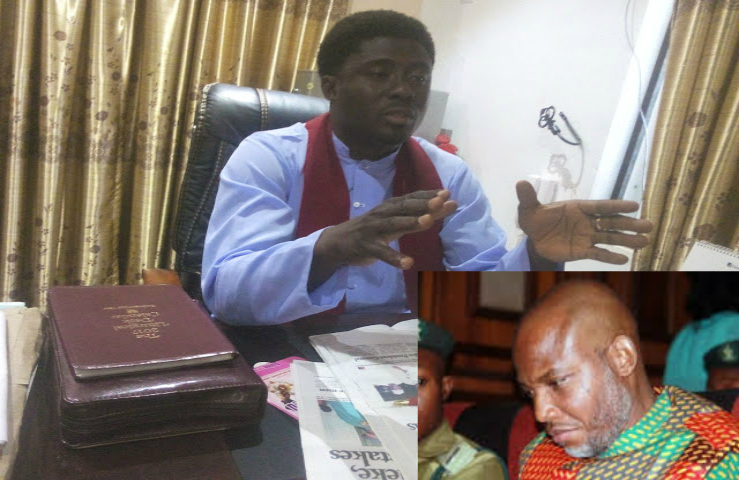 He described the incarcera­tion of Kanu as an injustice and inequity from the government.

The clergyman said that ad­dressing various critical issues like injustice, marginalisation and others which fuel the urge to secede would have far-reach­ing effect than holding other people captive.

Obimma took the anti-corruption war of the Buha­ri-led Federal Government to the cleaners over alleged lop­sidedness.

He spoke at the end of a 33-day prayer session with the theme: “My Year of Divine En­thronement” organised by his ministry. The event was alleged­ly attended by about 1.5 million participants across the globe.

He preached from 9pm to 9am and attended to over 600 participants after the prayer ses­sion.

Two deaf and dumb partici­pants: Paul Ukachukwu and Ber­nard Mmaduka, said that they re­ceived their healing as they could hear and speak.

Obimma said: “The President (Buhari) is partial in his anti-cor­ruption war. For him, the politi­cians in the ruling APC are saints but the ones in the PDP, APGA, and other political parties are cor­rupt. Let there be equality; let love lead Nigeria.”

Obimma, a Catholic Priest with Onitsha Archdiocese and Parish Priest of Blessed Iwene Tansi Parish, Umudioka, Dunu­kofia in Anambra State, lamented that with the exchange rate of the dollar to Naira worsening daily, Nigerians were finding it very dif­ficult to afford the basic require­ments of life even as many indus­tries and businesses are have shut down.

He continued: “My message is for our country Nigeria where­by some people are under oppres­sion. We say we’re one Nigeria but that’s only in words. I am advo­cating for equity, justice, and fair­ness.

“And again, God has absolute power; holding other people cap­tives just like Nnamdi Kanu who is languishing in prison. And eve­rybody is passive about that even Ohanaeze Ndigbo. Injustice is in­justice.

“I pray that the Federal Gov­ernment will grant him (Kanu) amnesty. As you can see, there is hunger in the land. The President and others should alleviate hun­ger in the land. The people are dy­ing daily. Prices of goods are sky­rocketing. As a priest, I’m not happy when I see my flock suf­fer,” he stressed.