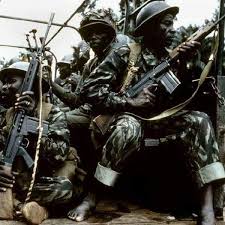 The man Timothy Onwuatuegwu, is an indigenous son of Igbo Land.

Colonel Onwuatuegwu didn’t see much action until Operation OAU in 1968 when he and Biafran Colonel E.A. Eutuk were put in charge of defending Owerri, Umuahia, and Aba. Onwuatuegwu fought against the forces of Nigerian General Benjamin Adekunle in May 1968 but lost the city to Murtala Muhammad’s men on August 28, 1968. On July 18, 1968 Onwuatuegwu was able to capture the city of Umuahia from Benjamin Adekunle after many days of heavy fighting. On April 21, 1969 Onwuatuegwu assisted E.A. Eutuk’s soldiers during the Defense of Umuahia in which Onwuatuegwu was able to drive off all Nigerian forces within a day of fighting

Col Tim Onwuatuegwu and the Biafran S. Brigade was about the most dreaded Biafran Army Unit. They liberated many Biafran cities from the Nigeria forces and fought till the immediate fall of Biafra.

The S. Brigade had three battalions headed by newly promoted Major Archibong, Major Atumaka and Major Okoi, under the leadership of the newly promoted Lieutenant Colonel Timothy Onwuatuegwu, who was later promoted to the Colonel, within a month of the formation of the S. Brigade, due to the achievements of the brigade. Onwuatuegwu’s 2nd Battalion had been disbanded before the fall of Opi Junction by the saboteurs at the Biafran Army Headquarters, as they could not eliminate him.

There are two accounts about Timothy

Onwuatuegwu’s death in days following the surrender. One account by his former co-conspirator Maj. Adewale Ademoyega states that he was tricked into attending a meeting at a hotel with federal officers of the 3rd Marine Commando Division. At this meeting, that was said to have occurred on January 15, he was summarily shot dead by vengeful officers personally aggrieved by the assassination of Brig. Ademulegun and his wife during the 1966 Nigerian coup d’état. An alternative account given by Col. Obasanjo states that during the process of surrender, Onwuatuegwu unsuccessfully attempted to ambush him near Amichi. After this he apparently made for the Cameroon border and was later killed in a firefight with Nigerian 1st Division soldiers. The truth about Maj. Onwuatuegwu’s death remains a mystery.

The Senate Anti-Restructuring Vote, Biafra Agitation and the Rest of Us