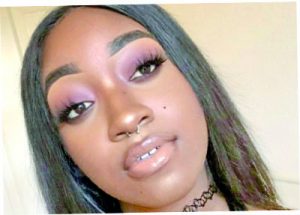 The name, Ifeoma Obi might not ring a bell to the fans of Nigerian movies, but in a couple of months, she would be on the radar, as she has just landed her first movie role in Funke Akindele’s production.

Born and brought up in California, United States, Obi is determined to leave no stone unturned to achieve her set goals in the entertainment industry. She is of the opinion that at 22, she doesn’t need a man in her life until she makes a huge impact in her chosen career.

“I don’t have a boyfriend for now. Well, I can’t say if I’m still a virgin, all I know is that, there is time for everything. So, I will have a boyfriend in God’s time. For now, I’m single and focused,” the actress said.

Obi said further: “However, I like men who are brave, confident and very hardworking. I value men that can hustle. But then, my man must be taller than I am. I know I’m very tall, but I want a taller man.”

When asked if she is ready to face the scandals that come with being celebrity, the dark-skinned, script interpreter said: “I’ll make sure I keep a clean slate. I would always have it at the back of my mind that my dad always watches the news, so I have to make him proud and not the other way round.”(the sun)