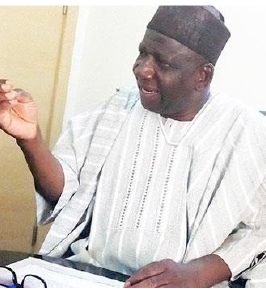 National Chairman of Action Democratic Party (ADP), Yabaji Yesufu, in this interview, frowned at the policies of the current administration, especially the fight against corruption and the 2018 budget.

Looking at the administration of President Buhari, how would you rate his administration in terms of the fight against corruption and the state of the judiciary?

He has not done well. In fact, he has performed woefully. Even if you take the case of Col. Dasuki, they said he diverted $2bn that was voted to fight Boko Haram. Today, this government that came to fight corruption has also done the same thing. They have voted $1bn to fight Boko Haram. And we know that there is no Boko Haram to fight. It is just money to fight election. Or if you like rob people of their free choice. They want to bastardise the process more than we have ever seen.

Don’t forget that the capital budget for 2017 has not been implemented and here we are battling with the 2018 budget. So what are they going to do with this money? They now came out and say they have $1bn. So if you are talking about corruption, this government is much corrupt. In fact corruption is more endemic and entrenched under this administration more than the previous administration. The previous administration, you may call them looters but these ones are super looters. Because a glaring case of abuse of office by the former Secretary to the Government of the Federation (SGF) took this administration almost one year plus before they admitted that something was wrong before they suspended this man and they have refused to allow the EFCC to interrogate this person. We still have other cases of corruption at the highest level of governance and that wasn’t the case in the Jonathan administration. I am sure that this government is a still born baby in the fight against corruption.

Talking about 2019, where will your party zone the presidency to?

In a nation like ours where democracy is at its embryonic stage, nation with what I will call triple heritage in terms of democratic development; the issue of north and south dichotomy and religion are still real and to an extent the issue of the military interference or impunity is still very real too because you still have Obasanjo, Babaginda and Abdulsalami influencing how things are being done democratically. So no matter how you reluctantly accept it, zoning is still real. And to be at the right side of the sentiment, we have zoned the presidency to the north.

Talking about the north, the APC has zoned the presidency to the north, I am sure other parties will do same, won’t there be power tussle in that region?

The northern and southern dichotomy, religion and military influence in our politics which is much of a reality, is the reason for zoning. So you cannot ignore those sentiments. If you do that you do it at your peril. So if you are running for the governor or the president you have to put those factors into consideration. That is why other parties have not buried their direction too. It is not that people want to do it; it is just because of our political make up and experience, and the fact that sentiment, like you know constitutes 90 percent of political decisions of the electorate in a country like Nigeria. It is not so much about merit, I am not saying that merit is not important, but unfortunately we are still at that stage where these factors always place key role in decision making.

You recently said APC is a still born, what will your party do differently if elected?

Our party will see to the budget first. It should not be about elected officials forming cabinet and preparing budget and taking it to the National Assembly or State Houses of Assembly. The normal thing that should happen is making sure that people are accountable to our party.  And also simply because a person is the president or governor should not make the person the leader of the party; the chairman of the party is the leader of the party. So that if you want to appoint ministers or commissioners after winning the election, we are not going to force anybody on the person but you will have to bring the names of the nominees to the party for scrutiny. Everything must be in line with the constitution of the party.

If you enforce that, won’t it undermine the authority of the State Houses of Assembly?

No. It won’t. We will do our own before the Houses of Assembly do theirs. You know,  before you become a governor or president, you went through the primaries, it would be our own internal check and balances of the candidates we presented to the electorate. Similarly, when you are now elected as our representatives, just like the National Assembly does on behalf of the country, we will do our own on behalf of the party and our party will carry out oversight function on you irrespective of your portfolio. We have our party’s manifestos; our constitution recognises monitoring committee. So the committee will be like the National Assembly members who go about inspecting the activities of the executives. That is the missing link and that is why things are not working in Nigeria. We have taken so many things for granted because of money, lack of observing the ethos of democracy, forgetting that the political parties are the institution that is supposed to superintend, harmonise and foster unity of the activities of the three arms. More so, independence does not mean that they should be working at cross purposes or to be at loggerheads.

Your party is one of the newly registered parties and there are speculations that your party will go into merger to come out formidable ahead of the 2019 election, is it true?

I don’t think merger has ever worked to the advantage of the legacy of the parties that came together or the electorate. It turns out to be anti-climax or something that becomes a liability instead of something that should advance the course of the people and the political parties. Look for instance what is happening in the APC, the problem is that people that are supposed to be partners for progress are fighting each other because those who came from CPC, ANPP and  ACN still have their allegiance to those parties.

Are you saying that your party will not go into merger?

In today’s organisation it is not only in politics, there is no room for dominance. It is always collaboration. We are going to collaborate and not merging. We will come together to see how we can win election and how to go about it. So that at the end of the day we will have an understanding, knowing that you are strong at that area. I think that the kind of collaboration we are talking about maybe something that you depend on the dynamics of the situation, because politics is dynamic. We don’t see ourselves looking for parties to merge with. But we are going to collaborate. Even if it would mean forming a coalition we will have it. But to ask parties to change names, we won’t do that. If you look at the APC, the formation is artificial that is why they are rudderless. What we need now is an organic party with principles that would be non-negotiable.

What is one major philosophy of your party?

It is the entrenchment of democracy. Because the situation we are in Nigeria requires deliberate efforts to ensure that we bring back the confidence of Nigerians from the hands of political parties have held sway giving the kinds of disappointment the electorate have suffered in the last 17 or 18 years. So we believe that there is the need to have reinforcement of democratic ethos in the polity. So that is why we are here. We are talking of things like party supremacy, all inclusiveness and democratic empowerment of the youth and women.

Recently the National Assembly exposed irregularities in the 2018 budget, how is your party reacting to it?

If Jonathan regime had looters, this government has super looters. I am sure you can see the kind of mind-burgling revelations that are coming out in the way corruption cases are being handled. I don’t know how many people have been arrested and put behind bars. This administration is a still born that is why things are not working. APC is a dead baby that we are keeping and we need to throw it away with the bath water.

What is your party’s stand on restructuring?

What people do not understand is that they don’t know the context of restructuring. The context at the time was that Nigerians were disillusioned, so they wanted to return to their comfort zones either tribal or religious. Let us go back to the good old days; we have our laws that can take care of restructuring both at the economic, political and social levels. We have Revenue Mobilisation and Fiscal Allocation Commission which is supposed to be informing us how we generate and allocate revenues. At the political level we have the National Assembly that is supposed to look at the constitution and make relevant inputs. Our country can work because we have natural resources in every state. Even the size of the country is also an asset.

Most youths are into crimes. How is your party carrying the youths along?

The youths must be responsive to take power. Nobody gives you power, you take it. Let them register online and join the party. We have allocated 50 percent executive positions to the youths and women. So they should join our party and actualise their dreams.

Are you comfortable with your party’s performance in the Anambra gubernatorial election?

Anambra election is not an ideal situation. You had APGA which is like a regional party. Any party coming to contest should know that it has a tall dream to achieve. You also had a party who had money to spend and to show that it has might, we came 7th position. We did well taking into consideration the factors I highlighted. In fact, in an ideal situation we would have come 3rd.

Finally, fuel scarcity is always a problem at the end of every year, how do we wriggle out of this perennial problem?