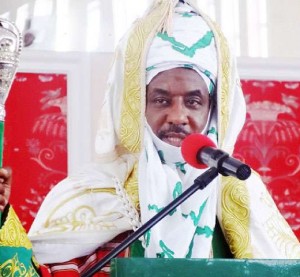 Emir of Kano, Muhammadu Sanusi II declared in Kaduna, yesterday, that if Nigeria were to be divided, two states, Borno and Yobe would be the poorest countries in the world.
The monarch said this in his key note address at the opening ceremony of the second edition of Kaduna State’s investment Summit, with the theme “Making Kaduna Investment Destination of Choice.”
The emir also lambasted northern leaders for their complicity in further impoverishing the region through neglect of activities and policies that can improve the productivity and prosperity of the region.
He further explained that the North West and the North East regions, despite making up a significant population of the country, are the poorest in every aspect.
“We are in denial. The North West and the North East, demographically, constitute the bulk of Nigeria’s population.
“But, look at human development indices, look at the number of children out of school, look at adult literacy, look at maternal mortality, look at infant mortality, look at girl-child completion rate, look at income per capita, the North East and the North West Nigeria, are among the poorest parts of the world.
“As far back as 2000, I looked at the numbers, Borno and Yobe states, UNDP figures… Borno and Yobe states, if they were a country on their own, were poorer than Niger, Cameroon and Chad.
“Nobody saw this because we were looking at Nigeria as a country that averages the oil-rich Niger Delta, the industrial and commercial-rich Lagos, the commercially viable southeast, and you have an average.
“Break Nigeria into its component parts, and these parts of the country are among the poorest, if it were a country. And, we do not realise we are in trouble.”
Sanusi maintained that citizens in the Northern region of the country must begin to develop a change of mindset with regards to certain issues that are currently viewed as taboo.”
The Kano monarch asked some thought-provoking questions which he said leaders of the region must find answers to in order to ensure a better society.
They include: “What is our attitude towards educating our girls? What is our attitude towards child spacing, so that we can financially maintain and educate and bring up children? What is the purpose of a large population that is not educated, that is jobless, that is unemployed?”
Going further, he urged Muslims to imbibe education and stop using religion and culture to set the region backward.
“Other Muslim nations have put forward girl education. Other Muslim countries have pushed on. We are fighting culture, we are fighting civilisation. You tell me that you should not write love book in northern Nigerian.”
He also said it was wrong to burn books of science based on religion.
“What is the crime of those books?”
Going further, he questioned the right of people in having more children in the region without having the resources to take care of them.  “Of what benefit is it to the North, having three million children roaming about?”  The former Central Bank governor also seized the occasion to speak about Nigeria’s increasing debt profile. He said among other oil-producing countries in Africa, Nigeria has been “borrowing domestically to fund current expenditure” and added that the growth of Nigeria was driven largely by rising commodity prices and debt, and the module has reached the logical limit such as the collapse in oil price.
The monarch also noted that, according to the International Monetary Fund (IMF), the Federal Government is spending 66 percent of its interest revenue on debt, which means only 34 percent of its revenue is available for capital expenditure, recurrent expenditure and development.
Sanusi said the 2017 budget presented by the Federal Government is a budget that goes for more debt.
“As a country, we must understand that the module of government borrowing and spending has reached its limit. Therefore, growth must only come from investment.”
The emir criticised leaders who “go to China to sign Memorandum of Uunderstanding (MoU) and come back with debt,  forgetting their areas of development.
“A nation and a state is only transformed by vision. Once that vision is lost, every other thing around the vision collapses,” the monarch noted.