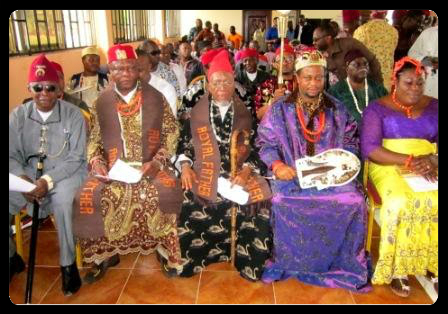 The 2016 edition of Igbo Day celebrations in Abuja, the Federal Capital Territory (FCT), may have come and gone, but the dust raised at the event is yet to settle.

Last week, the Centre for Igbo Arts and Culture (CIAC), Abuja, tackled the organisers of the celebrations, which held on September 29, 2016, at the Old Parade Ground, Area 10, Garki, for conducting the programme in English.

Addressing a press conference titled “Before Our Language Dies,” as part of activities marking this year’s International Mother Language Day, CIAC chairman, Sir Kanayo Okoye, said the use of English to conduct Igbo Day and other cultural events in the FCT and other places had made Ndigbo the object of ridicule before other ethnic nationalities: “Ndigbo often feel uncomfortable speaking their God-given language at public functions or gatherings, with the notion that their Igbo audience would simply regard them as illiterates. It was, therefore, embarrassing that English was the medium of communication during last year’s Igbo Day in Abuja.

“This unfortunate state of affairs, which has persisted over the years, has, no doubt, brought disrespect and contempt from other Nigerians who now discredit Ndigbo as a people without language or culture. We should show some pride in ourselves and salvage this ugly trend.”

Okoye, whose speech was delivered by the CIAC administrative secretary, Mr. Ifeanyi Atuenyi, was, however, impressed by the lively, colourful and rich celebration of the annual new yam festival in various cities and communities throughout Igboland, Nigeria and beyond.

Undoubtedly, the Iri Ji Ndigbo (new yam festival) has become a much cherished aspect of Igbo culture celebrated lately wherever the Igbo live across the globe.

CIAC also lamented the preponderance of Igbo children who could not speak their native language, blaming the anomaly on mothers for allegedly brainwashing “them into believing that Igbo language is ‘local’. The result is that English has taken over as the first language of our children, which has become the language they learn first and the language they speak last.”

The centre did not spare schools as it also held teachers liable for allegedly indoctrinating the children against speaking vernacular, while at home, parents profess the same negative gospel with the illusion that speaking the indigenous language would corrupt and portray the child as unrefined and interfere with his learning of English.

CIAC, therefore, urged mothers to know that raising a child in the mother tongue would not have any adverse psychological effect on the child, and that there is nothing wrong with a child learning two or more languages during the early days of development. “In fact, children are naturally endowed with the capacity of learning multiple languages, which provide them the opportunity to broaden their intellect and mental growth,” he said.

The 2016 Igbo Day ceremonies did not go down well with a large number of Igbo residents in the FCT; some prominent political office holders from the South-East inclusive.

To arrest the ugly trend, the Igbo traditional institution, headed by the Igbo 1 of Abuja, Eze Ibe Nwosu, has met over the issue and would soon make a pronouncement.

Indications emerged last week that leaders of the Igbo in Abuja may have decided to ban the use of English in conducting any cultural activity within the FCT.

A Board of Trustees member of the Igbo Centre, Mr. Edward Ihemebiri, disclosed that the issue was being discussed among the top echelo of Ohanaeze Ndigbo.

He noted that the efforts of CIAC in promoting Igbo language and culture, including reaching out to the FCT education authorities and notable private schools for the recruitment of Igbo Language teachers, were being frustrated by counter-productive practises such as the use of English at Igbo ceremonies.

Daily Sun learnt that, following these resolutions, no fewer than seven Igbo Language teachers have now been employed by the FCT through the efforts of the Igbo Centre.

The Ochigbo of Kuje, Chief Dominic Anigbo, who represented the Eze Igbo of Abuja at the press conference, confirmed that something would be done about the unwanted trend, even though he attributed the declining interest in Igbo language to the “near-nomadic” nature of Ndigbo who travel round the world for trade and other business.

Anigbo, who traced the link between the Igbo and the Jews of Israel, regretted that even traditional relics like shrines (mbari) that are still seen in Israel today could hardly be seen anymore in many parts of Igboland: “If you go to Israel, you see them; they are in America. What is killing our culture is that we travel too much. There is no part of the world where you will not find an Igbo man.”

He commended CIAC for its contributions in preserving and promoting Igbo cultural heritage, recalling that the Eze Igbo of Ghana had initiated similar a programme, which included engaging Igbo Language teachers for some schools in the former Gold Coast.

Despite the prevailing circumstances, CIAC has said that all hope is not lost. It described the recent decision of the British Broadcasting Corporation (BBC) to add Igbo as one of the 30 new languages to be used in presenting programmes as heart-warming.

Atuenyi said that the BBC platform would be a major boost to the promotion of Igbo language and culture, while Ndigbo should actively support and promote the programme by tuning in to it.

He also enjoined content developers to take advantage of the on-going digitisation of broadcasting to develop more Igbo content for radio and television side by side the opportunity offered by Multichoice through Africa Magic Igbo.

Some Igbo people living in Abuja told Daily Sun that state governments in the South-East and the apex Igbo socio-cultural body, Ohanaeze, have to pick the gauntlet.

They wondered how an Igbo man in any other part of the world would be expected to be ‘proud’ of his mother tongue when no South-East governor conducts government business in Igbo.

“It might sound laughable, but some governors in the South-East even address their people in English when they visit their communities,” a respondent, Mr. Kelechi Udemba, said.

Ihemebiri recalled, albeit painfully, that only former Anambra State Governor, Peter Obi, responded to letters written to all the South East governors some years back by the CIAC enjoining them to, once or twice a week, conduct government functions in Igbo, including their State Executive Council meetings.

He noted that Anambra made it a policy for sometime under Obi, but, “It is a matter of deep regret, however, that only little effort has been made to stem the dangerous tide that is currently eroding the cherished Igbo language and culture among Ndigbo themselves.”

“To further compound the ugly situation, our governors and leaders, except, perhaps, former Governor Peter Obi of Anambra State, are not helping matters as they fail to direct their attention towards reviving our language or culture,” he said.

CIAC also had a word for the new leadership of Ohanaeze Ngigbo, headed by Chief Nnia Nwodo.

The centre saluted Ohanaeze on the recently concluded election but urged them to “wake up from their passiveness and embarrassing leadership tussle and take up the challenge of promoting Igbo essence, language and culture.”

CIAC said: “There is no gainsaying that we have suffered unimaginable neglect and loss of influence in the affairs of the nation due to lack of a vibrant and focussed leadership from our past and present organisation of Ohanaeze and South-East governors.”

It therefore, called for a rethink, so that Ndigbo could live up to their God endowed capabilities towards always projecting Igbo agenda on all fronts

End Of The Road For Nigeria- NINAS