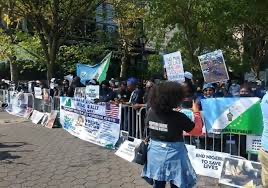 Self-determination agitators operating on the platform of Nigerian Indigenous Nationalities Alliance for Self-Determination on Tuesday began their one-million-man freedom march at the United Nations headquarters in New York, the United States.

The Chairman NINAS, Prof. Banji Akintoye, who is also the leader of the Ilana Omo Oodua, had said the protest which would last till September 24 was aimed at drawing the attention of world leaders to the atrocities being allegedly perpetrated against ethnic nationalities in the South and Middle-Belt of Nigeria by Fulani herdsmen.

The group, in the address read during the Tuesday, protest said the Federal Government headed by the President, Major General Muhammadu Buhari (retd), was giving herdsmen tacit support against their victims.

Apart from Akintoye, the Secretary-General, Tony Nnadi, who represents the Lower Niger Congress and Prof. Yusuf Turaki, who represent the Middle-Belt Movement at NINAS jointly called on the UN to take urgent step to prevent Nigeria from descending into chaos.

NiNAS said, “We, the Indigenous Peoples of Nigeria gather today at the Headquarters of the United Nations in New York to alert the UN, and the rest of the global community that the union of Nigeria has failed irredeemably; and is now at the verge of a violent disintegration with catastrophic consequences for global peace and security as our population of over 200 million would become an instant global refugee nightmare.

“The militia masquerading as herdsmen in an undisguised ethnic cleansing campaign that progressively demonstrate the complicity of the Federal Government of Nigeria, headed by Major-General Muhammadu Buhari (rtd.), a Fulani man, who as Commander-in-Chief of the Armed Forces of Nigeria is also the Life Grand Patron of the notorious Myetti-Allah Cattle Breeders Association of Nigeria.”

“The group that proudly takes responsibility for the murderous exploits of the Fulani herdsmen militia designated the fourth most deadly terror group.

Compounding their impunity, the same Myetti-Allah Cattle Breeders Association at a recent press conference organised to mock the planned NINAS million-man freedom march to the UN, boasted to be in control of the UN through their daughter, Amina Mohammed, the Deputy Secretary-General at the UN.

“An indication that (Amina Mohammed) nominated to that exalted UN position by the Fulani President of Nigeria Major-General Muhammadu Buhari, is in some way a part of the grand protection design for the Fulani herdsmen in their bloody, onslaught against the indigenous peoples of Nigeria.”

NiNAS said the UN in 2019 dispatched a Special Rapporteur Mission to Nigeria, led by Agnes Callamard, adding that its verdict was that the widespread extrajudicial killings were flowing from the unitary constitutional arrangements of Nigeria.