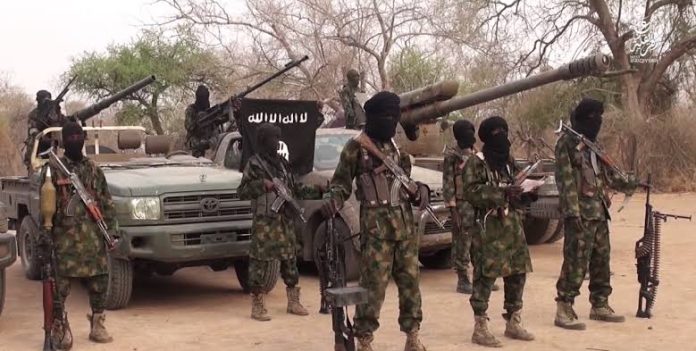 The United States has called on the Nigerian government to take the lead in the fight against insurgency in the country.

The Commander of U.S. Special Operations Command in Africa, Major General Dagvin Anderson, gave the advice at a digital press briefing on Wednesday.

He said the insurgents have started penetrating the north-western part of the country where they were already making some inroads, adding that they were looking to expand further south into the coastal areas.

Anderson said the U.S. would continue to support the Nigerian government with intelligence sharing on what the terrorists are doing.

He noted that this would also include supplying constant information on the operations of the insurgents in Borno State and the North-West.

The major general stated that for international efforts to yield desired results in the fight against terrorism in Nigeria, the government must take the lead.

He made the remarks while responding to questions from journalists about the insurgency in Nigeria which has claimed many lives and displaced millions of people in the North East.

The briefing was organised to discuss U.S. partnerships with African nations to reduce extremism, combat terrorist organisations, and bring about peace and prosperity throughout the African continent.

Read excerpts of Major General Anderson’s comments on the insurgency in Nigeria below:

We can assist with that – and it’s the United States can assist, the United Kingdom, other countries can come in, many countries can come and assist with that partnership – but ultimately it takes leadership from Nigeria in order for us to focus our efforts. We need to understand where Nigeria wants to focus those efforts so we can partner appropriately to have the best effect.

We have partnered with great effect with Nigeria in counterterrorism in the past. We have had good engagements with their air force in particular and providing C-208 capability, which is a light, fixed-wing ISR [intelligence, surveillance, and reconnaissance] platform, very capable, and we’ve had good engagement.

Recently, the Nigerian coast guard went out and rescued some Chinese fishermen that were adrift out off their coast. That was a combination of engagement from the U.S., where the U.S. had engaged with their maritime forces and helped build their maritime awareness along their coast.

And that was in partnership with their neighbours in Togo and Benin as well, who helped with that whole operation to understand the intelligence that led them to where these fishermen were, but then it was the unit that went out and did that was a Nigerian special operations unit that our Navy SEALs had trained a few years previously.

So sometimes it’s not the immediate effect, it’s the effect that happens two or three years later as you combine these engagements that have a greater effect later on. I know that’s just one small example and it’s not directly against terrorism, but being able to engage in that maritime domain and to be able to understand what’s going on out there is critical, and that has been an engagement the United States has had over several years with Nigeria and those other coastal states in both the naval and the special operations forces.

More directly to his point, we have engaged with Nigeria and continue to engage with them in intel sharing and in understanding what these violent extremists are doing, and that has been absolutely critical to their engagements up in the Borno State and into an emerging area of northwest Nigeria that we’re seeing al-Qaida starting to make some inroads in.

So, this intelligence sharing is absolutely vital and we stay fully engaged with the Government of Nigeria to provide them an understanding of what these terrorists are doing, what Boko Haram is doing, what ISIS-West Africa is doing, and how ISIS and al-Qaida are looking to expand further south into the littoral areas.

So these are all places where we stay engaged and we stay in great partnership with Nigeria, but I share the – and I can’t remember who asked the question, unfortunately, but I share the sentiment that it is quite disturbing that despite all this assistance, the VEOs are continuing to make progress and continuing to be a threat.

I think there are two factors in that. One, it goes to that each government has to focus on this and provide that focus for international partners to engage with. The other partner – the other part of this is we can’t underestimate the threat these violent extremist organizations pose.

We, as a community of international nations, keep thinking we have defeated them, or we have put them on their back foot and that they’re just moments from disintegration. I think after 20 years we have seen they are very resilient organisations that, although small, they’re able to leverage social media and other forms of media to have an outsized voice and that they continue to recruit and they continue to find opportunities.

And so, they have evolved. What they were in the ’90s and what they preyed upon in the ’90s is different than what we saw in the 2000s in Afghanistan and then in Iraq, and now as we see them come back into Africa and engage more in Africa, we see them exploit other grievances and other divides.

So, you can’t just say ‘we’ve defeated them,’ you have to continue to address weaknesses and places where these terrorist groups can – that they can exploit.