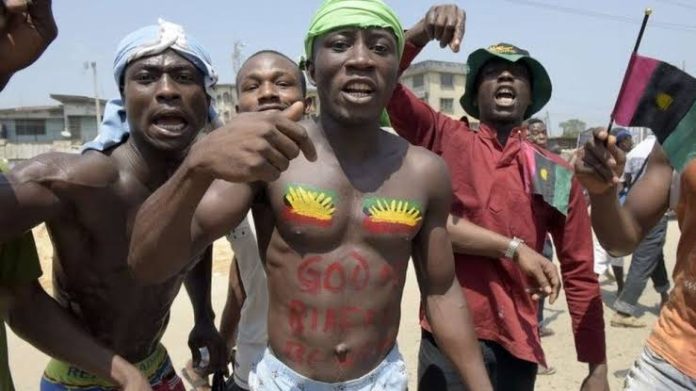 POLICE GIVES ACCOUNT OF CLASH WITH IPOB MEMBERS IN ENUGU

The Police Command in Enugu State says four persons were feared dead during security agencies and members of Indigenous People of Biafra (IPOB) clash on Sunday in Enugu.

Briefing newsmen on the incident on Sunday 23/08/2020, the state’s Commissioner of Police, Mr Ahmed Abdurrahman, said that police arrested five IPOB members involved in the clash, which started at the early hours of Sunday.

Abdurrahman said that the civil unrest caused by the mayhem disrupted human and vehicular activities for hours in the Enugu-Abakaliki Road precisely within the Emene community in the outskirt of Enugu metropolis.

He said that the Department of State Security (DSS) went on a covert operation in a particular location in Emene early Sunday morning; but they were overwhelmed and two of their officials abducted by the IPOB members.

“This morning I received a distress call that IPOB members were firing sporadically on the air and scaring people along the Enugu-Abakaliki Road precisely in Emene community axis of the road.

“The police quickly mobilized its officers and men from Divisions, Units and Area Command led by the Police Area Commander Metro that when to the scene but they were faced with heavy gun firing from the IPOB members and the police responded appropriately.

“However, in the cause of the development; I also invited the Nigerian Army and Nigerian Air Force, since we operate in unison and synergy, to ensure we restore normalcy quickly in that axis of Enugu,’’ he said.

The commissioner said that the police was able to rescue one of the DSS officials in a building they held him and some other policemen hostage.

“However, four persons lost their lives. These included two persons – which one was hacked to death with matchet and one innocent passerby set ablaze.

“Many of the IPOB members also escaped with bullet wounds in the gun duel that ensued between the security agencies and the miscreants (IPOB members),’’ he said.

He urged all hospitals in the state to accept and treat anybody with bullet wound; but ensure they also report the person to the nearest police station.

“The command has started tracing people with bullet wounds.

“If a hospital does not report to the police, if discovered, the health facility or hospital will be termed to be aiding and abetting criminality.

“We want to ensure that everybody involved in today’s mayhem and unnecessary killings are brought to book and taking to court to face the full weight of the law,’’ he said.

Abdurrahman, however, said that IPOB remained a proscribed group, urging the members of the group to renounce their membership and join other law abiding Nigerians to live peacefully.

“IPOB members have two options, either they resign their militancy and live in peace with others or they should quietly leave Enugu State for us in peace,’’ he warned.

However, in an interview with one of the IPOB members arrested by the police, one Ebube Agu, alleged that the members were only doing martial art training for self-defense before they were accosted by officials of the DSS.

Agu also alleged that IPOB members were not armed as claimed by the police.