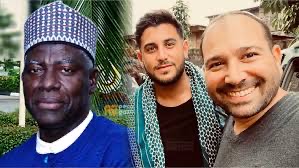 Three Israeli filmmakers who were imprisoned in Nigeria for 20 days were released from custody Wednesday night, and boarded a plane for their journey back to Israel.

Nigerian authorities released the trio from prison Tuesday evening and handed them over to US custody. American embassy staff then took them to the local Chabad center to spend the night.

They were given their passports and phones just before their flight took off for Istanbul Wednesday night.

The three Israelis will arrive at Ben Gurion Airport Thursday morning at 8:50 am.

The Israelis were in Nigeria to film “We Were Never Lost,” a documentary exploring Jewish communities in African countries such as Kenya, Madagascar, Uganda and Nigeria. They were focusing on the Igbo Jewish community in Nigeria.

In a statement published on Instagram Wednesday night, the trio said that they were “wrongfully taken on Friday July 9th, 2021 at 7:30 AM (Nigerian time) to the local DSS facility in Anambra State, Nigeria where they were held for 24 hours before being transported to the DSS headquarters in Abuja, 9 hours away with dangerous trasport [sic].”

The DSS, or Department of State Services, is Nigeria’s internal security agency.

The men said they were taken into custody at gunpoint by “over a dozen” DSS men wearing black ski masks.

“Rudy, Noam, and David were caged and held for 20 days in horrendous conditions, locked into a small cell, sleeping on the floor with no access to showers or clean clothes. They were interrogated and mistreated without ever officially being arrested or accused of anything.”

The three men said in their statement that they were officially cleared of all wrongdoing, but were instructed by the Nigerian government to leave the country immediately.

According to media reports, Nigerian authorities from the Department of State Services arrested and interrogated the trio on suspicion that they had come in contact with Biafran separatists.

One of the men entered Nigeria on a French passport, and the other two on American passports. This made it difficult for the Israeli embassy to get involved at the onset, according to sources with knowledge of the situation.

The families of the three Israelis said Wednesday that local political elements had “twisted” the gifting of a Torah scroll to a local community to claim it constitutes support for separatist political ambitions.

The Torah scroll is currently with the local community.

The men took off from Ben Gurion Airport on July 5 and landed in Nigeria the next day.

According to locals, the crew was detained at a synagogue during services in the Igbo village of Ogidi. The Igbo consider themselves a lost tribe of Israel.

“The filmmaking crew thought it would be a nice gesture to bring several gifts with cultural symbolism to the communities it planned to visit,” the families said in their statement, adding that one of the gifts was the Torah scroll.

“Unfortunately, members of non-state political groups have hijacked for their own purposes images of the filmmakers gifting a Torah to a local community,” the families charged.

A relative of one of the men told The Times of Israel last week that separatist social media accounts had taken advantage of the Israelis’ trip to claim that the three were supporting Biafran separatist groups.

This documentary is not intended to make any political statements about the countries in which filming will take place, nor does the filmmaking team endorse any political movements. The filmmaking crew acts as a guest visiting the country and its various communities – there are no political overtones,” they said.

The filmmakers were aware of the political sensitivity surrounding the filming of the Igbo community. Last Thursday, the “We Were Never Lost” Facebook page stressed: “We do not take any position on political movements as we are not here as politicians nor as a part of any governmental delegations.”

In January, a conflict broke out in southeastern Nigeria between Nigerian forces and the military wing of the Indigenous People of Biafra (IPOB) movement. The fight is ongoing.

A previous unilateral declaration of independence by the Igbo people in 1967 sparked a brutal 30-month civil war that left more than a million people dead.

In 2018, fugitive pro-Biafran separatist leader Nnamdi Kanu gave a radio broadcast saying he was in Israel and indicating he owed his survival to the Jewish state.

Kanu, a former London real estate agent, heads IPOB and the outlawed pirate radio station Radio Biafra. He maintains the Igbo people, who are in the majority in southeast Nigeria, are a lost tribe of Israel and it is his mission to lead them to the promised land of Biafra.

Kanu is facing treason charges in his homeland. He was arrested by Interpol in the Czech Republic in June 2021.