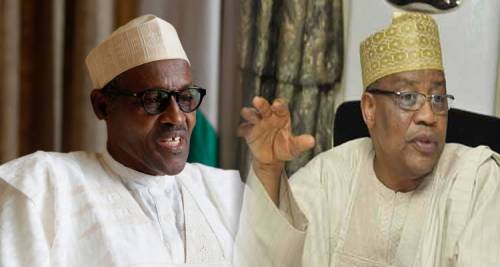 I greet you in the name of Allah and congratulate you on the return of your son Yusuf after an apparently successful medical tourism to a country better managed than Nigeria. When I saw Yusuf’s smiling face on television, I recalled the gloomy faces of my schoolmates picked up by moonlight that fateful night as we were being driven by our abductors to a land unknown after they forcefully took us from our school.

The excitement on your son’s face as he returned back to a life of luxury whereby he uses expensive motorbikes to drive away boredom contrasted sharply with the dreadful melancholy on the faces of my schoolmates as we were being taken in a rickety truck to a life of certain misery. I saw Yusuf being surrounded by ministers, government officials and a state governor, each person trying hard to identify with his joy. This was almost the same way our abductors surrounded us, each of them trying to identify closely with any of my schoolmates he found most sexually attractive.

When I saw the mirth and glow on the face of your wife over the recovery of her only son from a serious accident, I remembered the crying and tear-ridden face of my mother when they showed her on television. I heard that your wife thanked Nigerians for their prayers and concern over Yusuf’s accident. I also heard that my mother complained that security agencies harassed and beat her because she lamented the way the government handled the issue of our abduction.

His Excellency, I currently live with two men who take turns to rape me countless times in a day. The first day, I fought one of them as he tried to deflower me but he hit me so much that I passed out. It was when I woke up that I realised that he had deflowered me while I was unconscious. I wept for several hours over my lost virginity and wept more when I realised that the second man also slept with me too in my insentient state.

I wish you can ask these men why they usually thrust their stinking bodies on me one at a time, one after the other, anytime they finish saying their prayers, taking my pride as a woman in such a violent manner that I wonder whether the god they just prayed to do assent to such cruelty. I used to struggle and cry in the past but now I am drained of energy. So I only close my eyes and beg God to take my life and save me from an existence I never thought was possible. But God has refused to listen so I starve myself and eat any strange substance that I come about, hoping to die of hunger or poisoning. I am disappointed that I am still alive.

They did not care whether I ate or not in the first four days. But since their commander came and talked to them, they have been bringing food to me, sometimes begging me to eat. I overheard their commander telling them that they need to keep me alive and well so that they would use me to make a lot of money from the Nigerian government and get some of their commanders in government custody released. Initially I did not understand what they meant until one of them said they want to use me and my schoolmates the way they have been using the other girls they took from Chibok to blackmail and extort the government.

Sir, even in the lowest point of your glorious military service and your remarkable life, you wouldn’t have experienced half of what I am going through. I am permanently disheartened over my uncertain, miserable future and I keep thinking of my parents and siblings who don’t know whether I am still alive or dead. My mother is hypertensive and I doubt whether she would survive the abduction of her favourite daughter by bloodthirsty terrorists.

I don’t know where exactly we are being kept but I know we are very very far from our school where they took us. The truck that took us from our school drove through the road and bush for several hours in the night, until we got to a newly cleared place that looked lonely and deserted. They kept all of us who were taken from our school there for a day and then separated us and drove me and nine others for several hours to another place where we were shared out to twenty dirty, stinking bearded, Quran-clutching, gun-trotting men. The place we now find ourselves looks like it was hurriedly built with wood and paper cartons and is located deep inside a thick bush.

Every evening, they bring ten of us together in the house of a man they call Sheikh where I was surprised to see a big television with satellite connection which is powered by a small generator. Most of the men were usually interested in Nigerian news, which Sheikh interpreted to those who do not hear English.

All of us former schoolgirls usually sit quietly in a corner of the large room, each of us aware of the trauma and tragedy of the other. We recognise one another but we hardly talk to each other as we are aware that our oppressors may be listening and they have instructed us not to speak to each other. Even if we wanted to talk, I wonder in our anxiety and anguish what any of us may want to say to another. So we always sit face down, innocent girls whose lives have been ruined by the failures of the government and institutions that were supposed to protect them.

Mr. President, you need to do something about those in your government that tell regular lies and those who bring disgrace to your name. You need to see the way the men laughed when they heard that you have deployed 100 aircraft to look for 110 girls and how they laughed harder when they watched a newscaster narrating how the Nigerian police and army were blaming each other over our abduction.

It was the third day we were taken there that Sheikh explained the existence of the television. I heard him telling one of them that looked like a fresh recruit that they bought the television together with a generator and a lot of sophisticated weapons after your government paid them handsomely in order to secure the release of some kidnapped lecturers. They talk about you as if you are one of them. They seem very delighted that you are Nigeria’s president.

Sheikh has huge white beards and spoke with authority. He looks like you – tall, dark in complexion and lanky – but with a beard. He speaks to us like an uncle and keeps telling us that we were abducted in the service of the holy prophet and that we may be needed on an important mission. One day, I complained to him about the persistent rape and beating by the men that I live with. That was after one of them beat me mercilessly only because I was menstruating.

I wasn’t surprised or shocked when Sheikh told me that I should count myself lucky that some servants of Allah were violating an infidel. My ordeal is like an unending horror movie that I have become inured to surprises and shocks.

When we got back to the place we are staying after the encounter, both men beat me thoroughly with sticks. I did not cry or shed a tear. Maybe the tears refused to come or my body is now deadened to pain. I don’t really know.

Our dear President, it was during our sixth visit to the Sheikh’s place that I saw you on television looking very happy and excited amongst other expensively clothed men and women. It took me a while to understand that you were attending the wedding of the children of two serving state governors. Do you know that our abductors found the scene on television so amusing that they laughed and laughed and laughed? Their laughter was so loud and consistent that it drew the attention of all of us in the corner of the room. When we realised what tickled the men, all of us started crying. Our scalding tears were because of the tragedy of our lives and the tragedy of our country.

You see, when I was in primary school, I dreamt of being married by a wealthy man and having the kind of wedding you just attended. I realised that the easiest route to achieving such dream was to read hard and work hard. I read hard, I worked hard. That was the reason I have been top of my class since I entered secondary school.

Now my dreams are shattered. I don’t think I have a future. I don’t even want to have a future. Because the future offers me lowlife, endless sexual assault, possible pregnancy, death from the bullets of the Nigerian Armed Forces or the terrorists themselves. A future for me means possible indoctrination to become a suicide bomber whereby I go and blow up a market killing innocent people or being abused in captivity until I will be used as a bait to fund the terrorists and increase their capacity to kill more people. Or sometime in future I will appear on Shekau’s video, which would surely kill my mother. I just want to die now.