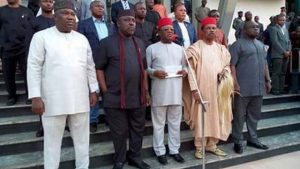 The Movement for Actualisation of Sovereign State of Biafra (MASSOB), under the leadership of Mr. Uchenna Madu, has warned South East governors against any step that would undermine the struggle for the actualidation of a sovereign state of Biafra.

The group gave the warning after its meeting in Abakaliki, EBonyi State capital, with some of its national officers.

Ebonyi State Coordinator of MASSOB, Ikenna Kalu, who read out a communiqué signed by himself and all local government coordinators of the state, said any governor in the South East who was not supporting Biafra agitation was  andenemy of the Igbo.

The communiqué partly read: “We are determined to actualize Biafra through
non-violence since we don’t have guns or any weapon. We insist on absolute freedom of Biafra because not even Igbo presidency or restructuring will stop us from agitating for Biafra because that is where we come from.

“No amount of Uwazuruike’s BIM will stop us or even their cheap black mail that will stop us from actualizing Biafra. Our meeting with Ohanaeze Ndigbo was not for any political interest but for the overall interest of the Igbo.

On the planned arrest of leader of the Indigenous People of Biafra (IPOB), Mazi Nnamdi Kanu, by the federal government, the group vowed that it will resist it with its last blood.

“We will fight, we will resist with even our last blood if they attempt to arrest Nnamdi Kanu again. We want to remind Nigerians that they are sitting on a time bomb”, it said.