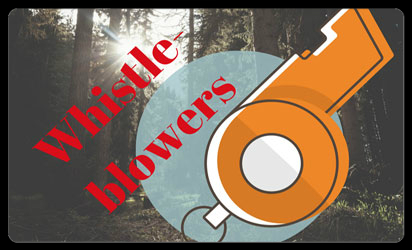 Just as the Chairman of the Presidential Advisory Committee Against Corruption, Prof Itse Sagay, Thursday took a swipe at two agencies of the administration for still engaging in untidy deals, President Mohammadu Buhari’s anti-corruption fight has taken more knocks, it was revealed yesterday.

While the Federal Govern-ment has adopted and placed incentives for whistle blowing as a means of fighting corruption in the country, top government officials have slapped the government policy by terminating the career of an assistant director, who raised the alarm that the sum of $229,000 and N800,000 had been diverted by key officials in the Directorate of Technical Cooperation in Africa, an agency under the Ministry of Foreign Affairs.

The whistle blower, Mr. Ntia Thompson, an assistant director with the Directorate for Technical Cooperation in Africa, who blew the lid in the fraud that embarrassed the key masterminds, was initially suspended from work on December 19, 2016 and was finally dismissed from service on February 7, 2017.

According to a public notice, the Minister of State for Foreign Affairs, KHADIJA BUKAR ABBA IBRAHIM, who supervises the DTCA, approved the compulsory retirement of Ntia from work with immediate effect.

Although it was not clear as at last night if the letter had been served on the sacked director, a copy of the notice of his dismissal had been posted on the DTCA public notice board.

The sack letter signed by Sanda S. Isah, Head of Administration Department in DTCA and addressed to all staff, said, “ I am directed to inform you that following the recommendations of the Senior Staff Appointment Promotion and Disciplinary Committee on Acts of Serious Misconduct against Mr. Ntia U. Thompson, the Honourable Minister of State, Ministry of Foreign Affairs and Chairman Presidential Inter-Ministerial Committee on the DTCA, has approved the Compulsory Retirement of Mr. Ntia U. Thompson from the services of the DTCA with effect from 7th February 2017.

“In view of the above, Mr. Ntia U Thompson ceased to be a staff of the DTCA with effect from 7th February 2017.

“All members of staff and the general public are hereby advised to take note”. The letter was signed and placed on the public notice of the DTCA on Friday with a handwritten instruction ‘Please Read’.

However, competent staff within the agency, who believe that the money in question was actually diverted wonder why both the police and the anti-graft agency whose attention was drawn to the fraud, turned a blind eye to the inimical act and allowed the suspects to go scot-free and boldly unleash their fangs on the victim.

Competent senior officials in the DTCA provided documents to allege some of the 14-member panel raised by the government to probe the allegations of breaching service rules levelled against the whistleblower could have been compromised.

The officials provided a list of 11 new senior staff hurriedly employed  by the leadership of the DTCA without advertisement or declaration of vacancies by the directorate in order to silence the panellists and get them to ease out the whistleblower from the establishment.

The document shows that the 11 ‘new staff’ were all employed as either Administrative Officer or Accounts Officer on the same date of December 30, 2016, just a day to the end of the year.

The officials confirmed that the new employees are either direct children or relatives of the panel members who were supposed to interview Mr. Thompson and write a report based on the civil service regulations and decide on whether he should be commended for the act of patriotism which he showed by reporting the diversion of the money in question.

One of the officials in the DTCA said, “If the government wants to know the truth about the identities of the 11 new staff and their relationship with the members of the panel that recommended the dismissal of Mr. Thompson, it should ask for the names of the new workers, their state of origin and their parents and see if they are related to the panellists.

“We have all the names and we can give them to the government any time they are ready to do proper investigation to know if the right thing was done and whether a minister and other top officials benefitted from the diverted cash or not,” one of the aggrieved workers at DTCA said.

It was not clear whether the sack of the staff would be approved by the Office of the Head of the Civil Service of the Federation, which has not been informed of the ugly development.

Whistle blowing a new concept introduced by the present administration to horn in graft, has reportedly led to the recovery of billions of Naira so far but it is not clear why many top government officials are frontally opposed to it.

It will he recalled that Ntia, as assistant director in charge of Servicom Unit at the DTCA had written a petition to the EFCC last December drawing attention to the surreptitious withdrawal of the sum of $229,000 and another N800,000 from the agency’s account purportedly for the purpose of celebrating the the tenth anniversary of the Nigerian Technical Cooperation Fund (NTCF) which was allocated $36,852.00, and monitoring of various projects executed from the Trust Fund across Africa.

However, when Ntia got wind of the diversion of the fund, he immediately reported the ugly development to the Economic and Financial Crimes Commission asking it to investigate the fraud .

But a few days after the EFCC had begun investigation into the scam, the whistle blower was summoned by the DTCA and queried on why he leaked official documents to the anti-graft agency and the media thereby exposing the agency to embarrassment.

Arising from the police report, the DTCA on December 19, 2016 formally suspended Mr. Thompson from work and asked him to surrender all property in his disposal to the agency with immediate effect. The suspension letter with ref. No. DTCA/P.082 Vol 1 was entitled, “Letter of suspension from duty” and signed by Sanda Isah, Head, Department of Administration/Secretary SSAPDC.

The letter said, “You will recall that you indulged in a series of acts of serious misconduct bordering on “violation of official oath of secrecy”, “absence from duty without leave” and “disobeying lawful instructions from superiors”. “Even though these acts were established to be heinous violation of the provisions of Chapter 3, Section 4, Rules 030402 (e, f, I, n, t, and w), management considered and meted on you the compassionate penalties of “letter of reprimand, letter of serious warning, and a query for abandoning official duties in defiance of lawful instructions from superiors, respectively.

Yet, these infractions did not abate. “It will also be recalled that on the 14th of July 2016, you wrote a petition to the Inspector General of Police in which you alleged threat to your life and that of your family members by the Acting Director-General, Mr. Mohammed Kachallah and Mallam Garba Alhaji Mohammed, Head of Programme Management of DTCA.

“In view of the weighty nature of this allegation, the police carried out a thorough inquest into the matter and turned in the final report. The report exonerated the two officers mentioned in the allegation of criminal intimidation thereby establishing that you made “false claims against government officials”.

“Against the backdrop of these serious infractions, the Inter-Ministerial meeting of the Senior Staff Appointment, Promotion and Disciplinary Committee met and looked into these issues in line with the provisions of the PSR. The committee recommended for your suspension from office pending the outcome of a final report of a sub-committee set up on the matter.

“In view of the above, you are hereby suspended from office immediately in line with the provisions of Chapter 3, Section 4, Rules 030205 and 030406 of the PSR. You are therefore directed to hand over all official documents/properties in your possession to the most senior officer in the unit.”