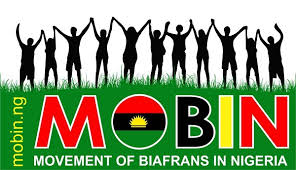 The Movement of Biafrans in Nigeria (MOBIN), the political arm of the Indigenous People of Biafra (IPOB) which is in Court in a representative capacity with the Federal Republic of Nigeria on the issue of self-determination, has called on the Biafrans to participate actively in the on-going election process in Nigeria. The group made the call over the weekend during the IPOB awareness and sensitization rally.
The group said that one of the means of getting freedom is through democratic and political processes, emphasizing that MOBIN is convinced on the use of proper political activities, diplomatic engagements, and well articulated democratic processes to liberate the Biafran Nation.
Addressing youths of the South East during their rally, Comrade Chukwudi Anachuna, the Director Youth and Sports of MOBIN stated that if the Biafrans participate actively in the forthcoming general election, the people would be in a position to choose persons who are agents of proper restructuring and Devolution of Power to the Regions and work towards achieving the goals of MOBIN.
Anachuna said, “We’re people of intelligence, good conscience and judgment. If we’re allowed to take decisions without interference, we will do the needful in putting proper persons in elective positions, leaders who will alleviate the sufferings of our people while we struggle for proper empowerment and other necessary issues”.
“We cannot continue to allow people with low sense of leadership in Biafraland, people who have no leadership skills, dishonest and selfish people, to be leading us in Biafraland. It is tantamount to allowing the blind to lead those who have eyes. This evil is caused by our lack of active participation in political processes. As nature abhors vacuum, the leadership gap is filled and occupied by dishonest and wicked people claiming to be our leaders.”
“These people are just opportunists that wangle their way into power due to our inability to elect the proper individuals. To ensure that this anomaly is corrected, MOBIN is totally against any form of election boycott in the Biafran region”.
He called on the region not to be frustrated and disillusioned by the recent happenings in the country that has made a mockery of our democracy through the flawed electoral processes as well as the very obvious failure and unaccountability of elected individuals serving in various positions. He maintained that with the on-going election reform and improvement, things would only get better.
Speaking at the rally, the Secretary General of MOBIN, Umeh Clinton, told the Biafrans that the group had given a conditional support to the Atiku/Obi ticket as individuals, on the condition that they would restructure Nigeria into Regional Governments in line with our vision, but in due time would assess other candidates for other elective offices and take a position on whom to support.
“All the Political Parties are promising heaven on earth but the Biafrans will never by swayed by these mere pronouncements by the politicians. We will study their manifestos critically and decide on which of them to support.
“Be assured that we will support only a candidate that will not stifle our quest for self determination as any candidate we will support will aid our quest for Biafra in one way or another” Mr. Umeh Said
Anachuna concluded the address by encouraging the Biafrans to ensure that they participate fully in the forthcoming elections in Nigeria, emphasizing that we are still Nigerian citizens whilst seeking to exercise our right to self-determination by due process of law as Indigenous People of Biafra living in Nigeria.