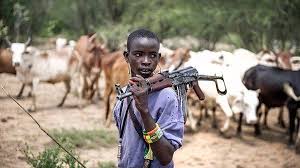 The Federal Government will be working with state governments to rediscover the lost grazing routes and reserves across the country as part of measures to end farmers and herders ’ clashes .

The Senior Special Assistant to the President on Media and Publicity , Garba Shehu , disclosed this on Friday in a statement titled “ President Buhari : Farmers will reap benefits of our policies .”

Shehu quoted the President , Major General Muhammadu Buhari (retd . ), as speaking at a meeting with Katsina State Elders Forum at the Presidential Villa , Abuja on Thursday .

The statement read , “ The President told the meeting that he had charged his ministers of agriculture to work with the states to rediscover the lost animal grazing routes and reserves as a means to ending the frequent outbreaks of violence between farmers and herders.

“ He also pressed the necessity of educating school – age children , saying that once the opportunity of early education is lost , it often turns out very difficult for them to make up .

“ President Buhari also broached the issue of armed banditry and kidnapping that had bedevilled Katsina and other North Western states and gave assurances that the situation would be overcome in the same way the farmer – herders , attacks were subdued. ”

According to the statement , Buhari also said Nigerian farmers would reap the benefits of his government ’ s reforms as he continues to accord the highest priority to agriculture, describing it as the country ’ s largest employer of labour and engine of growth .

Note: This is Fulani program for conquest and in line with fulanization agenda. Open grazing is obsolete and should be done with. Modern society goes for ranching as a way of rearing animal .Say no to open grazing! End open grazing now