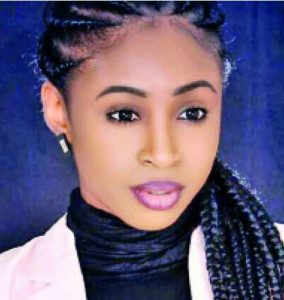 Model and former beauty queen, Chidinma Okeke, is determined to make her mark in the Nigerian music industry.

Signed to OUK Records, the Sociology undergraduate of Nnamdi Azikiwe University, Awka, Anambra State, dropped her debut single, ‘Friends’ in May, and it has since been making waves.

In this chat with Entertainer, Okeke opens up on her career, dreams and plans to empower the girl child among other interesting issues.

What inspired your debut single, Friends and what has been the response?

Wow! Friends was inspired generally by what we go through in life, most especially our dealings with friends. It is also a message to people out there to be careful with people they call friends. Since it was released, the response has been mind-blowing. We have received a lot of positive reviews and a lot of people are interested in working with me.

How did music begin for you?

Growing up as a child, my biggest dream was to entertain people, do music and lots of good stuff in that direction. So, I would say the passion has been there since I was six-years-old or thereabout. As little as I was back then, I realised that my mum had a great voice and she would lead praise worship at home. So, I guess mum influenced me tremendously. And then, I would stand before the mirror presenting, dancing and entertaining my siblings and myself.

Tell us about growing up. Are you born with a silver spoon?

Hmmm… I am the last of six kids and growing up was nothing but sheer excitement and bliss. I want to thank God for that. I must confess that I am from a privileged background and never lacked anything. I attended the best of schools and my parents made sure my siblings and I had the very best. Because I was the last child, I was not brought up the way others were brought up. My parents pampered me a great deal because they gave birth to me at their old age. So, I had everything going for me. My elder brothers and sisters bought me stuff and everybody was always fusing over me and kind of did everything to make sure I was happy.

As an up and coming singer, what are your challenges?

The challenges are legion. I have to work on myself and keep trying to improve on my game, because this is a very tough industry. There are thousands of talented kids out there doing their stuff and hoping for that big break. There is a lot of competition and you have no choice but to always be on your feet. In this industry, the need to stand out and be unique cannot be over-emphasised. You need to keep improving with every performance. As a female artiste, you have to work 10 times harder than your male colleagues to be noticed.

When did you write your first song and what inspired it?

Wow! Shout out to my music producer, Dapiano. I wrote my first song this year and I did it with the help of my producer, and like I said earlier, it was borne out of my experiences.

As a student of Sociology, how do you balance your academics with your music career?

It could be hectic I must confess. But I have a very reliable team at OUK Records. They’ve got my back; they always have me covered.

You talk with so much intelligence and understanding. Do you have any political ambition?