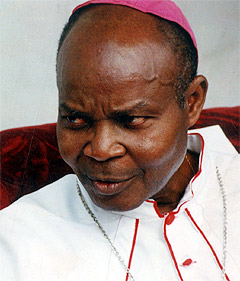 CATHOLIC Archbishop Emeritus of Lagos, Anthony Cardinal Okogie, has expressed fears of Nigerians entrusting their security in the government of President Muhammadu Buhari.

Okogie in a nine-paragraph letter he personally signed, yesterday, said his fears were founded in the President’s admittance that he didn’t know that the Inspector of Police, Ibrahim, Idris, flouted his order to remain in Benue in the wake of the new year day killing by herdsmen that claimed 73 lives. He said: “In Nigeria’s security architecture, the President, as Commander-in-Chief of the Armed Forces, appoints and oversees all service chiefs, including the Inspector-General of Police. They take orders from him. He assures us that he receives regular security briefings. But he has just made a candid admission that he is not in control of his service chiefs.

“He ordered the Inspector-General to relocate to Benue State in January. He admitted in March that he did not know the order was flouted. Does the Inspector General of Police brief the President? Will the President fire him? Is it wise for Nigerians to count on this government for their security? “In affront to his person and office, his order was flouted, there were killings in Plateau State during his visit, and more killings in Taraba, Benue and Kogi states.

Boko Haram, said by the President’s spokesmen to be degraded and technically defeated, abducted 110 schoolgirls in Yobe State.  Are the service chiefs still taking orders? Is the President still in control of security? “Instead of declaring the murderous herdsmen a terrorist organisation, the President offers pious exhortation to their victims to love their neighbours. His party and the ruling party of yesterday score cheap political points, comparing notes on levels of incompetence and gravity of negligence in security matters displayed by their respective governments. “The ruling party of today claims its government acted faster in Dapchi than the government of the ruling party of yesterday in Chibok. Both gloss over a disturbing question: where were our security operatives when our innocent daughters were abducted first in Chibok, and then, in Dapchi?”   “Our security is not only threatened by herdsmen.

It is also threatened by the incompetence of our leaders, their conduct or misconduct, their greedy unethical glorification of perks of office.   If, as one senator recently said, each senator receives 13.5 million naira per month as running cost, added to 720, 000-naira monthly salary, then our security is threatened.   Interestingly, the Senate has not contradicted what this senator said.

The senator himself has not told Nigerians if he too had been receiving this huge amount. “A senator should be able to do his work with half that amount, even with less.   So, one may want to divide what Nigeria spends annually on her senators by two.   The result would be 9, 299, 880, 000 naira.   If that were divided by the number of universities in this country which is 175, the result would be 53, 142, 171 naira.   Give that to each university for its library.   It will drastically improve the quality of education in this country. “But the scandal is not just the amount we spend on our senators.   Nigeria spends so much on government.   Yet, there is little or no governance.   We spend so much maintaining the President, 36 Governors, close to 50 Ministers, members of a bicameral National Assembly, and members of 36 state houses of assembly, advisers and special advisers, assistants and senior personal assistants.

That will vastly improve our prospects for prosperity and security.   To do otherwise is to sentence this country to a future of unending poverty and insecurity. That Nigeria invests more in her recycled politicians than in her youths is a breach of security that mortgages her future. “But education is not the only neglected sector in this country.   Uninterrupted electricity remains a fleeting illusion.   That certainly affects security.

It affects the economy too.   Without electricity, this country cannot grow her economy.   Nigerians hear of economic recovery. ‘’But it is not felt in their pockets.   Many are dying of hunger.   Salaries are not paid.   School fees cannot be paid.   Parents withdraw children from school. Meanwhile, Nigeria’s politicians, paid huge sums of money, throw lavish wedding parties, at a time of heightened insecurity, and the President and Vice President lead the guests. “Lust for perks of office has made elections into public offices in Nigeria  a security concern. Machiavellian politics has become the most lucrative business.

Nigerians must reflect on these questions before voting next year: when shall we have a government and Commander-in-Chief that truly protect us? ‘’Will there ever be conversion of hearts among Nigeria’s politicians? When will Nigerian political office holders begin to serve those whose votes put them in office?   Can it be said that this narrative of negligence, incompetence, greed and insecurity is a prelude to 2019?  We are watching and waiting.’’