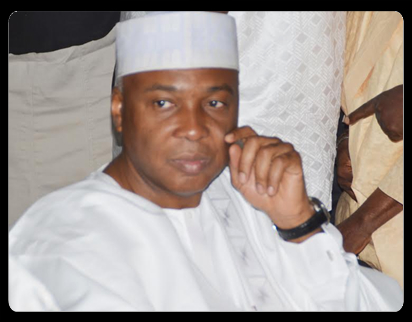 ABUJA—SENATE President, Bukola Saraki yesterday said that what Nigeria as a country needed at the moment, is  full recognition of the Igbo as a people. Saraki said the country needed the people of the South East geo- political zone of the country more than ever.

The Made-in-Aba Trade Fair in Abuja is a zonal intervention project of Senator Abaribe.

The Senate President, who was represented by the Deputy Senate Majority Leader, Senator Bala Ibn Na’Allah said  the ingenuity of  the Igbo would have enhanced Nigeria’s production capacity over the years, adding that Nigeria as a country was paying the price for neglecting the creative prowess of the Igbo.

He said: “If there is anything this country needs now, it is the Igbo. Nigeria needs the Igbo’s technological advancement now. We are paying the price of ignoring the creativity of  Ndigbo in the past.”

According to him, the decision of governments over the years to neglect the  productive instinct of the Igbo had led to the backward state of the economy, adding that “In God’s wisdom, recession has come to force us to look inwards.”

Speaking on the Made-in-Aba trade fair, Senator Saraki, who noted that the Senate would continue to do everything to promote made in Nigeria goods, said that the upper chamber had taken it upon itself from last year to amend the Procurement Act to ensure that the local manufacturers benefit from the over N2 trillion government expenditure on procurement.

Saraki said: “With the amendment of the Public Procurement Act, which has passed final reading in the Senate, and is making its way through the House of Representatives, we are in the process of making it easier for manufacturers and entrepreneurs around the country to benefit from the over N2 trillion in government procurement contracts.

“Through this challenge, which is still ongoing, we hope to identify goods, services and other products that can be matched with investors and government agencies, to further the plight of our homegrown businessmen and women.

“On our part, we in the Nigerian Senate, and the National Assembly as a whole, will continue to do everything within our mandate and power to ensure that our domestic manufacturers and service providers have the enabling environment that they need to thrive. I believe in Made- in- Nigeria, I believe in Made- in-Aba. The possibilities ahead of us are endless”

Also speaking at the event, the Abia State Governor, Dr. Okezie Ikpeazu, who disclosed that local manufacturers of shoes and leather products export at least one million shoes to Europe on a weekly basis, said that the state is happy that Acting President Yemi Osinbajo has approved the garment making industry of the Made- in- Aba sector.

According to the governor, there are 15,000 shoe makers in Aba, who produce 300,000 shoes per day, while one million of these shoes find their way to Europe and other parts of the world on a weekly basis, just as the exports are estimated at about N1 billion weekly.

In his remarks, the initiator of the Trade Fair, Senator Enyinnaya Abaribe, who explained that the project is designed to promote Nigeria and to grow the country, expressed his joy that the idea was spreading across the country like wild fire, adding that it was a no-go area in 2013 when he floated the idea.

He added: “When we started in 2013, it was not fashionable to promote Made- in-Aba or Made- in- Nigeria goods. I thank the Senate President and my colleagues who supported us to stage last year’s edition after which we passed a motion to encourage local manufacturing and then, we also passed an amendment to the Procurement Act.”

He also thanked the Small and Medium Enterprises Development Agency  (SMEDAN) for remaining steadfast to the idea of promoting made-in-Nigeria, just as he encouraged other lawmakers to situate their zonal  intervention projects in SMEDAN.

‘SMEs responsible for 84% of NLC workforce’

Speaking also at the event, Director General of SMEDAN, Dr. Dikko Umar Radda who noted  that small and medium enterprises are responsible for 84 percent of the Nigerian labour workforce, said: ”In Nigeria, SMEDAN/NBS survey, 2014 estimated a total of 37 million MSMEs”

These contribute total employment of 59.7 million persons (or 84%) of Nigeria Labour force, 48 % to nominal Gross Domestic Product (GDP) and 7.3% to exports respectively.”

According to him, 98 percent of the MSMEs are micro enterprises, employing less than ten persons. The SMEDAN has taken it upon itself to help grow its capacity to enable Nigeria realise her economic aspirations. He also thanked Senator Abaribe for pioneering the effort aimed at promoting Made-in-Nigeria, adding that trade fairs like the one being flagged off, easily facilitate    direct  customer-to- contacts as well as sales.

He said that so far, over 400 enterprises have showcased their products in the trade fair, adding that with an average of 200 persons visiting per day, the fair was adjudged good and successful.

Four Regions In Nigeria Opt For A New Constitution,Southern President