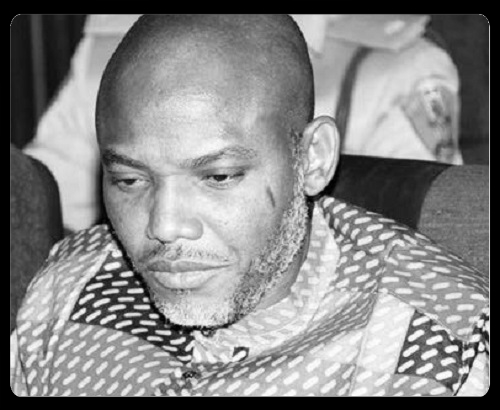 in the last few weeks, the leader of the Indigenous People of Biafra (IPOB), Mr. Nnamdi Kanu, who is currently on bail, granted to him by the Federal High Court, Abuja, has increasingly engaged in activities that seem to be alienating the bulk of the Igbo elite who fought for his release from incarceration at Kuje Prisons, in the federal capital territory.

Kanu has stridently lampooned the forthcoming Anambra State governorship election scheduled to hold on November 18 and has even made and repeated his audacious declaration that the poll would not hold. Against the background of the 2019 General Election, he also made a sweeping statement that elections would not hold in any part of the Igbo speaking areas of Nigeria, which in his estimation represent Biafra Land, unless a date is announced by the Nigerian State for holding a referendum on Biafra Independence.

As if these statements were not disconcerting enough, members of IPOB were alleged to have disrupted a programme at a Catholic church, in Ekwulobia, Anambra State, where Governor Willy Obiano was in attendance.  Equally troubling was the allegation that a governorship candidate was attacked during a burial ceremony at Ihiala.

As these and other troubling incidents unfold, Anambra State has been tense as the crusade by IPOB foot soldiers against the governorship election continues. One particular Anambra indigene who was nettled by the IPOB stance against the election is His Majesty, the Obi of Onitsha, Igwe Alfred Achebe. Also angered by IPOB’s anti-election activities is the the state Chairman of Ohanaeze Ndigbo, Chief Damian Okeke-Ogene, some religious leaders and other members of the political class in the state.

All of these people have severally warned IPOB and Kanu to back pedal of what they view as a foolhardy effort that would rather imperil the state if response to their activities, the federal government declared a state of emergency and swept away the democratically elected government, resulting in the appointment of an administrator, who could be a non-indigene.

Feelers indicate that Kanu is fast losing the support of members of the Igbo elite, who stuck out their necks to advocate for his release from Kuje prison, and even put their integrity on the line by standing as his surety. Some among the elite paid the N300 bail bond imposed by the court. This influential group are now obviously being alienated as they recoil from the embarrassment, which Kanu’s utterances against the Anambra gubernatorial election represents.

The anti-election campaign is now burning up the internet as heated debates are being held on various social media platforms. After news of the alleged disruption of the Catholic church event by IPOB broke on online newsblogs, the group promptly dissociated itself from the allegation but accused the Anambra State government and it paid agents of masterminding the incident by sponsoring some boys to cause crisis in order to label the group as a violent group. This, the Media and Publicity Secretary of IPOB, Mr. Emma Powerful said, was intended to instigate the security forces of the Federal government to clampdown on its members.

Not long after, a news story went viral on social media that Kanu visit Lagos for a mammoth rally would literally shut down the metropolis in the same manner that it happened in Abakaliki, the Ebonyi State capital, when he visited the place. Again, IPOB denied the report as fake news, stating it had no such plans in the immediate future.

Baring his mind on the tenuous issue of Kanu’s carryings on since he has been out of Kuja Prisons on bail, a candidate of the People’s Democratic Party (PDP), Hon. Ikenna Unachuwku, who contested for the Anambra State House of Assembly election in 2015, to represent Idemili North constituency, cautioned Kanu to rethink his bid to stop forthcoming governorship election, warning that the effort “would ruin him.”

His words: “Election in Nigeria is a constitutional issue and people have the power to exercise their franchise, we are still in Nigeria for now, we are not yet in Biafra and we have to look at what the Constitution says. If there is no election in any part of the country a state of emergency would be declared, eventually the military takes over and it will take the federal government six months to conduct fresh election. So, it is a very sensitive issue. Whoever that said that election will not hold but wants referendum should first of all let the election be held and then the referendum will come. You must be part of a system for you to workout your objective in that particular system.

“My advise is that Kanu and his members should recognise that candidates do not conduct elections. IPOB members should channel their energy to the Independent National Electoral Commission, Abuja, to tell INEC that election will not hold in Anambra. It is not when you see an innocent gubernatorial candidate, you tell him there will be no election. It is his right to vie and our right to vote. On that day I may decide to go or not to go to cast my vote, some of us don’t have voters card, you cannot force anybody not to vote.

“The pictures of those that attacked the church wore T-shirts with Biafra flag and IPOB logo. It is only the members that can identify the real members or fake ones since they are denying it. They said they are organized, they should have their register to know who is who in their group but they can’t deny the cameras, and no masquerade will come with IPOB uniform. My advice is that they should not attack governorship candidates, if we come out that day and we didn’t see INEC officials then we will go home, so they should go and tell INEC not to come and conduct election in the state.”

A lecturer at the Department of Medical Laboratory Sciences, Nnamdi  Azikiwe University, Awka, Dr. Patrick Manafa in his remarks condemned IPOB for saying that election will not be held in the state, describing it as the highpoint of lawlessness and trying to step beyond his boundaries in the struggle.

He expressed displeasure that Kanu has surrounded himself with people that lack intellectual capacity to advise him properly, on how get to get what he is aspiring for, adding that he is fighting a personal war. He said Kanu was trying to replace late Dim Chukwuemeka Odumegwu Ojukwu even without consulting the elders of Igbo land as well as wanting to make himself the supreme leader of Ndigbo, which he said is not practicable.

“Kanu should know that well meaning Igbo people including the Ohanaeze Ndigbo led by Chief Nnia Nwodo, who he has been insulting, made efforts to free him from prison. When he came out of prison, I was glad he was going round visiting those people but suddenly he turned against them and even started insulting traditional rulers including the revered Obi of Onitsha, it is pitiable. That is not the way to go, he should sit down and talk with intelligent people that will advise him. He should not be carried away by the crowd he controls,” Manafa said.

Speaking further, he said: “He should be very, very careful, I don’t even know the reason he doesn’t want election to hold in Anambra state; he is not from Anambra, there is a seating governor in Abia state his home state, he has not told him to resign. He does not know that this election is different from sit-at-home order he is now using to claim to be very popular. There is no popular political party that does not have a candidate and their followers will come out that day to vote.