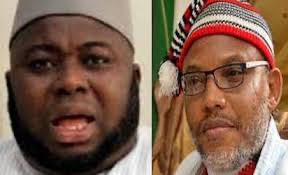 The former leader of the Niger Delta Peoples Volunteer Force, Mujaheed Asari Dokubo has said that the name belated Nnamdi Kanu for his position on Biafra stressing that “Biafra has nothing to do with the Igbos.”

Asari, who’s the Chairman of Biafra Defacto Customary Government while appearing on AriseTV on Wednesday, said that the leader of the Indigenous People of Biafra, IPOB “is empty in his head” for demanding an Igbo Biafra noting that the name of the Republic of Biafra was suggested to the Eastern Consultative Assembly by an Ijaw man; Francis Opigo.

The territory identified as Biafra is Ijaw. Maybe a little ibibios towards the end and Oron people.”

In 1967, the eastern ijaws were part of Eastern region. An Eastern consultative assembly was convoked in Enugu and Francis, an ijaw man gave the name ‘Biafra’, moved the motion that Biafra should be adopted. Francis Opigo’s suggestion was adopted on the 30th of May 1967, and the republic of Biafra was declared which included the eastern Ijaw within our territory.”

“So, Biafra has nothing to do with Igbos”

“The Biafran state that was declared in 1967 was not an Igbo state.”, he said.

Asari said Nnamdi Kanu rather than attempting to turn Biafra to Igbo Nation should seek for dialogue and cautioned against bringing religious division into the mix of Biafra restoration.