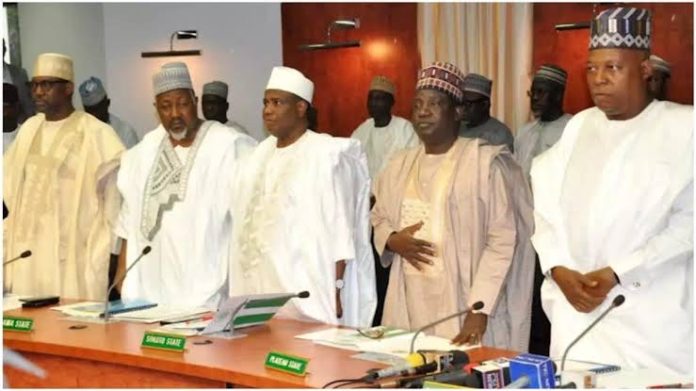 The Northern States Governors Forum, NSGF, has expressed a different opinion with position of their Southern Governors counterparts on the issues of 2023 Presidency and the collection of Value Added Tax, VAT.

The Southern Governors had In their meeting on 16th September in Enugu resolved that the president of Nigeria in 2023 should come from the South. The forum also supported the collection of VAT by states.

However, in their meeting today in Kaduna, NSGF faulted the position of the Southern Governors stressing the Constitution of the country is explicit on how a president should emerge.

“The Forum observed that some Northern States Governors had earlier expressed views for a power-shift to three Geo-Political Zone in the South with a view to promoting unity and peace in the Nation. Notwithstanding their comments, the Forum unanimously condemn the statement by the Southern Governors Forum that the Presidency must go to the South. The statement is quite contradictory with the provision of the Constitution of the Federal Republic of Nigeria (1999) as amended that the elected President shall:-

a) score the majority votes;

(c) In the case of run-up simple majority win the election.

In their resolution signed by the Governor of Plateau State, Rt. Hon. Barr. Simon Bako Lalong, the Northern Governors while restraining comment on the issue since its before the court said that Lagos State accounts for over 50% vat because most cooperate bodies “wrongly” pay their VAT through Lagos which is the commercial capital of Nigeria.

“The Northern State Governors Forum considered the on-going National debate on the collection of Value Added Tax (VAT). As responsible leaders while we are constraint by the fact that the matter is sub judice we however for the purposes of educating the public make the following observations:

b) Rivers and Lagos State Government had enacted their own VAT laws and the Southern Governors Forum have expressed support for this course of action;

(c) VAT is being confused by these State Government as a sales tax. If every State enacted its own VAT Law, multiple taxation will result in increases of prices of goods and services and collapsed in interstate trade. VAT is not a production tax like excise, but terminal tax which is paid by the ultimate consumer;

d) Another confusion is ignoring observation above and its “overall effect”. The reason Lagos account for our 50% Vat collection is because most of the telecommunication companies, Banks, manufacturing and other trading activities have their headquarters in Lagos with the resultant and wrongful attribution of VAT

(e) Until and unless the Supreme Court pronounces judgement on the substantive matter between Rivers State and Federal Government, the matter is sub judice and Northern States Governors Forum would respect this.”