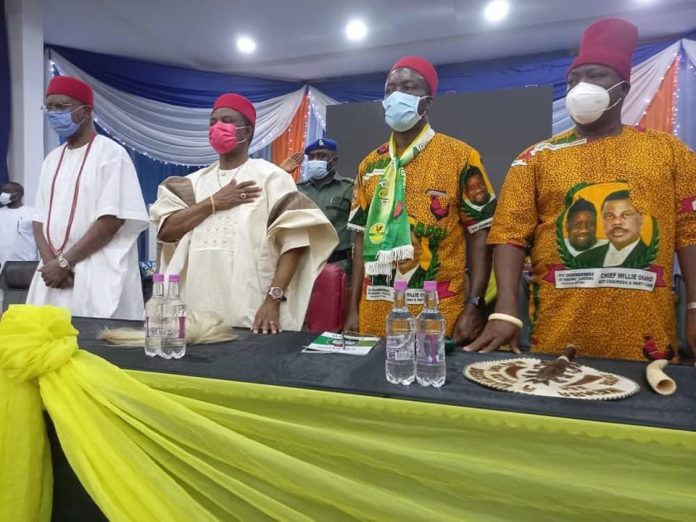 Governor Willie Obiano on Tuesday, September 28, 2021 met with the Traditional Rulers of Anambra State to thank and appreciate them for their support and cooperation for his administration over the years at the Dora Akunyili Women Development Centre, Awka

The Governor used the occasion to evaluate his administration by presenting some of the monumental achievements of his government especially in the areas of infrastructural development in the state. He said his government has achieved so much despite the dwindling resources of the state. He urged them to be part of the on-going transition process as partners in progress

He also used the occasion to present Professor Chukwuma Charles Soludo, the All Progressives Grand Alliance gubernatorial candidate as his choice of successor to the Royal Fathers.

In his goodwill message to the Traditional Rulers, Cee Cee Soludo commended Governor Obiano for achieving so much with so little. He described the traditional institution as the base of local government in the society. He commended the roles played by the Royal Fathers in their various communities

Presenting himself formally to the Traditional Rulers, the former CBN Governor said with the training, exposure and experience he has garnered both locally and internationally over the years, he is better suited to succeed Governor Willie Obiano

He also presented his manifesto saying it is a robust agenda covering every sector of the State economy. Cee Cee Soludo also reminded the Royal Fathers that APGA is the identity party for the Igbo man. He added that it is the platform to put Ndigbo in the front-row in the national politics of the country

Also speaking at the occasion, Senator (Sir) Victor Umeh (Ohamadike), former Senator of the Federal Republic and former APGA National Chairman, gave a recap of the political history of the State. He commended Governor Obiano for his outstanding performance saying Soludo will consolidate on it.

Speaking on behalf of the Royal fathers, the Obi of Onitsha, HRM, Igwe Nnaemeka Alfred Achebe commended Governor Willie Obiano for performing exceedingly well as Governor of Anambra State. He assured the Governor of the continous support of the traditional institution to the government of Anambra State for the progress and development of the state

He commended the union for its support for his administration and specifically charged them to encourage the people to put aside the Monday sit-at-home syndrome by coming out to do their legitimate daily businesses. He said the state loses billions of Naira each day the sit-at-home is observed which is detrimental to the state economy

He equally used the occasion to present Prof Chukwuma Charles Soludo to the union as his preferred choice to succeed him.

Cee Cee Soludo commended the strategic role being played by the union in the various community in the state. He added that he will consolidate on the “community chose your project mantra” of Governor Willie Obiano by deepening the community master-plan of the State

He explained the summary of his manifesto to the union adding that everything contained in the document has been carefully thought through.

“At the minimum we will deliver on this, at the best we will surpass it,” Soludo further assured

Responding, the National President of the Union, Chief Barrister Titus Akpudo commended Obiano for his outstanding performance in the State and the recognition and importance accorded ASATU.

He pledged that the union will continue to cooperate and support the government of Anambra State at all times!