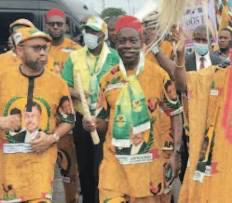 The All Progressives Grand Alliance gubernatorial candidate, Prof Chukwuma Charles Soludo has assured the Onitsha Head Bridge Traders that he will ensure Onitsha retains its premier position as the international trading hub in Africa if voted as the Governor of Anambra State

He was received at the occasion by Chief Sunday Obinze, President-General Head Bridge Market, before delving into giving a recap of his career as iterinant Scholar consulting for more than 20 organisations and financial institutions across the globe before coming home to serve the nation in various capacities under President Olusegun Obasanjo

To enhance the traders business, Soludo assured that the issue of electricity will be tackled headlong while the revival of the Onitsha port will be taken up. He also promised to liaise with relevant government agencies to address the issue of Customs encumbrances in freighting goods to the South East.

He said his agenda for the youths is to create 130,000 jobs every year to get them fully engaged. He added he will equally create 1,000 youth millionaires every year to further drive job creations and economic boom in the state

He promised to set aside a N5 billion as start-up business capital for young entrepreneurs to engage in business in the state asserting that his major job will be to promote made-in-Anambra goods and services.

“I will be the chief marketing officer of made-in-Anambra goods and services as a way of promoting businesses and boosting our State economy,” Soludo re-assured

Soludo further told the traders that his greatest desire is to encourage manufacturers from China and other parts of the world where the traders go to buy their goods to set up their manufacturing plants in Anambra State. This, he said, will reverse the business strategy from being an importing to an exportating State

He also promised to digitalize their business by providing almost free wi-fi Internet connectivity to enhance their business activities. This he said will be achieved by working with telecom providers in the country

“Anambra is going to be the digital tribe in Nigeria. You must get yourself enmassed into the world of tomorrow” Soludo said

Soludo also told the traders that the incessant harassment from police, customs and Agberos will be addressed. He assured that all illegal taxes will be cancelled saying technology will be deployed as a better option to collect taxes.

He reaffirmed that Onitsha will be modernised, cleaned up and made green assuring that he will work extremely hard in delivering these promises to the people

Pastor Peter Onuorah who preached at the monthly devotion service called on the people to be conscious of their actions. The clergyman said it is only righteousness that exalts a nation saying everyone will one day stand before God to give account of his deeds while here on earth. He therefore called on the congregation to always show love to one another.

Hon. Uche Okafor (wiper), Commissioner for Trade and Commerce urged the people to vote for Soludo because he has the experience and training to turn Anambra State around for the better

Other dignitaries at the occasion include: Hon Emeka Asoanya (war machine) Chairman of Onitsha South LGA, Chief Ikechukwu Ekwegbalu, President General of ASMATA among others