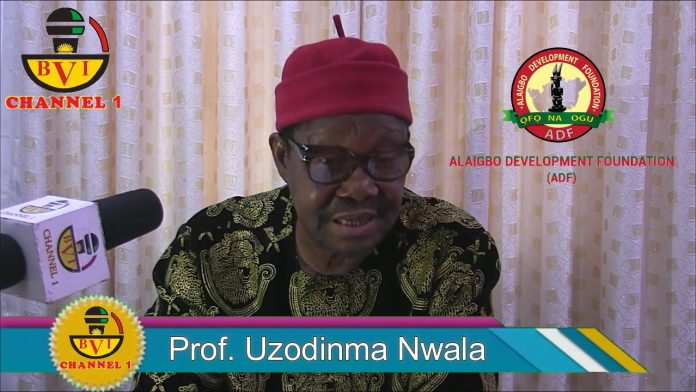 The group stated that the best way to resolve the lingering crises of the monolithic federation in Nigeria was to have had the autonomy of the various nationalities restored so that those who genuinely wish to live together under one common nation-state would do so based on the fundamental right to self- determination.

ADF made the suggestion, on Wednesday, in a solidarity message to the victims of the Southern Kaduna massacre. Spokesman of the group, Abia Onyike, in the massage said that after a thorough review of the on-going mindless massacre of Christians in Kajuru, Chikun and other local government areas in Southern Kaduna Senatorial District of Kaduna state in Nigeria, the ADF concluded that “the on-going gruesome massacre of Christians in Southern Kaduna by Fulani militants/ terrorists/ Herdsmen is a continued manifestation of the unresolved crisis of Nigerian federalism.” “The ADF unequivocally condemns this mindless massacre of innocent citizens, brought about by the brazen impunity of Fulani hegemonists and their armed militia organizations.

“The ADF believes that genuine development will continue to elude Nigeria unless the Nigerian federation is reconstituted into autonomous regions, where the Ethnic Nationalities( both majority and minority) are empowered to assert their right to self-determination.” The group wondered how long Nigerian citizens shall continue to be subjected to such a punitive culture of pestilence, mass killings, bestiality and unmitigated violence. “The ADF sympathises with the plight of the Southern Kaduna People’s Union (SKPU) who are currently facing one of the worst forms of genocide perpetrated by annihilationist forces.

We are in solidarity with them at their moment of grief as they mourn and bury their loved ones. “ADF calls on President Muhammadu Buhari to urgently intervene by stopping the on-going genocide in Southern Kaduna. The Government should address the allegation that the security forces have taken sides with the Fulani militants to wipe out the Christian communities in Southern Kaduna, with the sole aim of taking over their ancestral lands,” ADF alleged.

It asserted that the crisis of Nigerian federalism has reached its crescendo, where over 32,000 Christians have been massacred in the last decade by Fulani terrorists in the Middle Belt of Nigeria, namely Kaduna, Plateau, Benue, Taraba (Mambilla) and Nasarawa states. “The best way to resolve the lingering crises of the monolithic federation in Nigeria is to have the autonomy of the various nationalities restored. Those who genuinely wish to live together under one common nation-state should do so based on the fundamental right to self- determination. No nationality should be forced to belong to any political association rejected by her citizens. “President Buhari and his team should make haste while the sun shines. Sooner than later, Nigeria may degenerate to the situation of Rwanda in 1994 or go the way of Somalia,” ADF warned.