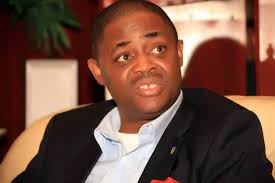 If you go to court you will win but there will be
war and Nigerians will be massacred. Please
accept the results as the will of God”- Sultan of
Sokoto to Atiku Abubakar.
The words above have been attributed to the
Sutan of Sokoto and understandably they have
caused quite a stir. He has not refuted them and
consequently I assume that they are his words. If
he really said them, my response is as follows.
I have immense respect for the Sultan of Sokoto
and those he represents but I am constrained by
the Living God to ask the following questions.
Who is afraid of war? Are we not at war already?
Why didn’t the author of these words tell Buhari
not to go to court after he lost in 2003, 2007 and
2011?
The election was rigged and under Buhari, over
the last three years and nine months, innocent
and defenceless people have been slaughtered all
over the north whilst the south has been
castrated, cheated, enslaved and robbed of its
future and destiny. All this yet you are saying that
we should just accept it in order to avoid being
massacred and in order to avoid war?
When our brothers and sisters in the Lord are
being slaughtered and murdered in cold blood
what more do we have to lose? Are we not
already at war? Have we not been robbed of our
rights, freedom, dignity and heritage already?
Have we not been reduced to nothing and
rendered powerless? What more do we have to
lose?
Our votes don’t count! Our protestations don’t
count! Our lamentations don’t count! Our tears
don’t count! Our sorrow doesn’t count! Our pain
doesn’t count! Our suffering doesn’t count! Our
humiliation doesn’t count!
Nothing counts or speaks for us anymore!
You have stripped us bare and taken everything
from us. Yet you expect us to just sit there and
take it and threaten us with war when we wish to
insist on our lawful and constitutional rights?
This is not about Atiku. It is about those he
represents and those that have put their trust in
him and given him a mandate! He is their only
hope. And woe betide him if he betrays that
mandate or their trust! If MKO Abiola could stand
for what was right up until the end and insist on
his mandate, even though it cost him everything,
so must Atiku Abubakar.
If some believe that the only way they can
preserve the peace is by threatening the rest of
us with war, lauding it over us and turning us
into quislings, appendages and cowardly sub-
humans then damn their peace and let them keep
it.
Nobody wants war except those sadists that take
pleasure in massacaring others at the drop of a
hat in the name of faith or tribe. Nobody wants
war except those that seek to strip and deny
others of their rights and dignity and turn them
into slaves.
Wars are fought in order to protect those rights
and to ensure justice, fairplay, equity and
freedom. They are fought in order to resist evil. If
that is what we have to do in order to restore,
redeem and defend the lives, pride, dignity and
liberty of our people then so be it.
We shall not look for war or provoke it because it
is a terrible thing that no sane person would
desire or pray for. However if it is thrust upon us
by the delusional, bloodthirsty and misguided
elements in our midst and that hold sway in our
nation we shall not kneel down passively and beg
them or run away from it.
This country belongs to us all. We shall never
accept subjugation, slavery and servitude as being
our portion. We would rather die first. And neither
can we be intimidated by any empty boasts or
threats of massacre and war.
(Femi Fani-Kayode, 11th March 2019)