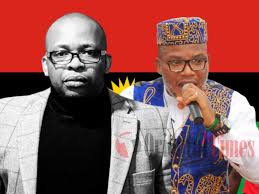 A storm is gathering in IPOB as one of it’s frontline members, Bright Chimezie Ishinwa has called for the immediate resignation of their deputy leader, Uche Mefor after he appealed for a change of attitude and approach to Biafra question. Chimezie accused the deputy leader of the proscribed movement of giving IPOB perceived enemies information to talk down on the group.

It could be recall that Uche Mefor in the last two months has been very critical of the actions and attitude of some of the members of the group. Recently, he accused some group of cabals in IPOB of causing trouble and deviating from the original vision of the movement. Mefor’s revelations however has raised a lot of questions concerning the sincerity of the people leading the proscribed group.

On the other hand, Nnamdi Kanu, the leader of the separatist movement during his broadcast last week announced to his followers that, there will be serious overhauling of the group’s structure and that only those who are called will stand the test of time. This announcement has caused immense tension among IPOB sympathizers. Although, reactions from different quarters over the announcement of Nnamdi Kanu shows that it’s followers have been fractured into different factions.

Investigation by our correspondent also shows that there is an obvious crack in the leadership structure of the movement. One of the leaders of the group who doesn’t want his name on print authoritatively told our correspondent that all is not well and if precautionary measures are not taken to arrest the ugly situation, IPOB might be completely consumed. “We are only asking for a change in approach. The present method is only dragging us back. Anything short of the above demand will force us to withdraw our support”, he said.

Moreover, a lot of IPOB members have deserted the movement after discovering the high rate of inconsistency in the leadership structure. Many of them who deserted the group have continue to criticise Nnamdi Kanu whom they tagged a serial liar. But IPOB leader who appear to be too sure of restoring Biafra keep reassuring his followers that Biafra will be restored in 2020.

According to reports, many IPOB members have started preparing to welcome Biafra by December as mixed reactions have continue to trail the whole saga. This is not the first time the fugitive leader of IPOB has made such promise. Investigation shows that he made the same promise in 2015, 2016, 2017, 2018 and 2019 without any of these promises seeing the light of the day. Political observers still believe that Nnamdi Kanu is only making all these bogus promises just to keep his followers on hostage while millions of naira enters into his coffers through monthly contributions of his poor members.