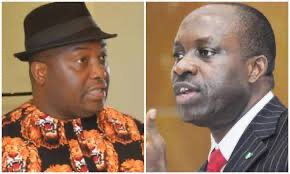 The senator representing Anambra South in the 9th senate who doubles as the YPP governorship candidate for the Anambra State 2021 gubernatorial election, Mr. Ifeanyi Ubah has challenged Professor Charles Chukwuma Soludo, the APGA candidate to provide his manifesto within 24 hours and also submit himself to a public debate within 7 days of presentation of the manifesto.

Make no mistakes; this pedestrian remark which smirks of the kind of meddlesomeness and mischief the failed series business man is reputed for will not receive any attention whatsoever from Professor Charles Chukwuma Soludo and it is simply because it is not in the purview of anyone outside a political party to decide how another party or candidate should manage or operate its campaign timetable.

It is therefor imperative for Mr. Ifeanyi Ubah to busy himself with another venture or embark on another global crowd funding effort for his dead on arrival gubernatorial ambition since the just concluded one was a flop.

There will be no debate inside or outside a debate. The ANAMBRA STATE GOVERNORSHIP DEBATE will hold in due course and it will be anchored by reputable arbiters who enjoy national and global credibility not mobs.

If the discuss is narrowed down to significant tests of popularity and acceptability, such tests will be anchored on the shoulders of real life Anambra voters, reputable stakeholders who own stakes at the various platforms where the patrimony of our dear state is debated and global institutions like NOI Polls, Deloitte, KPMG or PriceWaterhouseCoopers not hirelings of political extremists and adherents of recharge card politics.

Anambra is an egalitarian society – prominent for setting the pace in diverse areas of the human endeavor like education, trade, aviation, ICT, infrastructure and even liberalism therefore our politics will reflect these tendencies.

Systems elsewhere can go low but there is already an irreducible standards in Anambra state below which our state, our people and our politics will not be allowed to get,

As much as Mr. Ifeanyi Ubah qualifies to be a gubernatorial candidate in Anambra State, care should be taken to understand that his fame doesn’t by any means place him on the same pedestal as popular or prominent Anambrarians – simply put, he is a famous Anambrarian but he is not a prominent Anambrarian.

For the records, while Professor Charles Soludo is a prominent Anambrarian notable worldwide for His exploits in world trade, international finance, macro- economics, foreign policy and fiscal actions, international trade and industrial policies, global financial architecture amongst others, Mr. Ifeanyi Ubah is only famous for most especially His numerous business fiascos which jointly birthed a remedial liability of about N150B to the Nigerian state for which the Assets Management Corporation of Nigeria – AMCON is exercising legal powers, his face off with the Department of State Services over the whereabouts of properties of the government of Nigeria held on trust and the truth that he has a peculiar reputation in the Nigerian banking and finance eco system.

Anambra state is approaching a crucial election; expectedly, political banters and clout chasing are allowed. If Mr. Ubah is coming under this point of order, then he is entitled to His right to clout chase to the extent of referring to Baze University as prestigious whereas it is actually a third tier private university, famous for nothing, reputable for nothing and home to nothing.

Baze University has just been clothed in borrowed robes by Mr. Ubah who enjoys name dropping but for what it’s worth, the university has not featured in any global ranking of universities even in Northern Nigeria.

No groundbreaking discovery in medical research, ICT, science or technology has been attributed to it not even a journal or text book just as it has no global or continental authority in tertiary listed amongst its academic staff list of professors.

What exactly is the quality of education Mr. Ifeanyi Ubah gain from His 4 years excursion to Baze university?

It is my opinion that Mr. Ubah avails himself some wise counsel before instructing any of his hired pens to engage the public on his behalf as their next outing will only be as bad as their first which involved distinguished ranking senator Chukwuka Utazi who effortlessly pulled the shorts off his waist and exposed his legendary anti-Anambra antics.

Ndi Anambra still recall how Mr. Ubah was openly questioned on the floor of the hallowed chamber of the Nigerian Senate over his back arm tactics aimed at stifling the trade operations of Nigeria’s flagship auto assembling corporate – Innoson Vehicle Manufacturing (IVM) Company Limited.

Clearly, that was beyond an epic exposure – it was a revelation of the content of the actual manifesto with which Mr. Ubah resumed duties as a Senator.

He campaigned with one manifesto – “Recover the Igbo Economy” but started work as a Senator with another manifesto – “destroy Nigeria’s only functioning vehicle manufacturing plant.”

It takes a lot of insight and privileged information for a ranking Senator as Chukwuka Utazi to openly disgrace and caution Mr. Ifeanyi Ubah on the need to stop causing his constituency embarrassment.

Senator Utazi’s letter is a public document and for the avoidance of doubts, the constituency he referred to in that letter is Anambra State which simply means that Anambra is not safe in the hands of Mr. Ubah.

Genuine concerns have been noted in view of the possibility that state funds may be channeled into non state ventures.

As much as these suggestions may yet have any basis, one is constrained to imagine if indeed moribund projects like the Nnewi cathedral, stadium, relegated football club, tank farm and phantom projects like the Football Made in Anambra idea, the proposed private university, modular petrochemical refinery and part ownership of the Ibaka deep sea port in Akwa Ibom will not come to fruition on account of an undesirable character accessing the treasury of Anambra State not forgetting the backlog of wages owed thousands of miserable workers some of whom have painfully died under avoidable circumstances.

So much is required from a man like Mr. Ifeanyi Ubah and it starts with a deliberate attempt on His part to eat the humble (not disgraceful) pie and get a proper education in a competitive institution where His intellectual capacity will be tasked alongside His proficiency in public, civil communication outside the floor of the Nigerian senate and a managed audience without the aid of video editors and his capacity to adapt to the demands of corporate leadership and governance in a post COVID-19 economy.

I concede that Mr. Ifeanyi Ubah has done a lot for Himself and believers in His recharge card politics but so far so good, it’s been a case of misplaced priorities otherwise, how does one rationalize the logic of sponsoring a bunch of jobless and miserable youth on voyages to Dubai, Russia, England and elsewhere under the guise of mentorship only for beneficiaries to graduate into a life of perpetual servitude as his never paid private security men, grass cutters, drivers and stadium cheer leaders as against Prof. Charles Soludo whose recapitalization intervention in the Nigerian banking sector led to the licensing of innovative fintechs, national micro finance banks, primary mortgage banks and finance companies all of whom were and are still mandated to avail to the public loan products that address the needs of entrepreneurs and SME’s as well as various product papers on assets acquisition and more.

Seek ye first an education and every other thing shall be added because the blind cannot lead the blind.

Professor Charles Soludo is a trail blazer and a distinguished scholar and global economist who commands respect from global institutions including the United Nations, European Union, International Monetary Fund, African Union, ECOWAS, and nations across all continents.

He will continue to engage Ndi Anambra across all divides as part of his campaigns and when it is time for a governorship debate organized in conformity to known standards, he will mount the stage and do justice to the occasion.