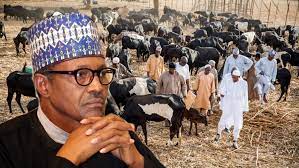 Ondo, Delta, Cross River, Enugu, Benue and Akwa Ibom state governments on Sunday faulted President Muhammadu Buhari, over the existence of a gazette, which marked out grazing routes for cattle across the country.

Officials of the state governments, who stated this in separate interviews with The PUNCH, also insisted on the ban on open grazing despite the President’s opposition to it.Recall that Southern governors at their meeting in Asaba, the Delta State capital, last month banned open grazing as part of measures to address killings by herdsmen.

But the Attorney General of the Federation and Minister of Justice, Abubakar Malami, SAN, faulted the governors, saying their action was like banning the sale of spare parts in the North.

He said he had directed Malami to produce a gazette, which delineated grazing routes in all parts of the country in the First Republic.

The President stated, “What I did was to ask him to go and dig the gazette of the First Republic when people were obeying laws. There were cattle routes and grazing areas. Cattle routes were for when they (herdsmen) were moving up country, north to south or east to west. They had to go through there.”

In his reaction, the Chairman South-South Governors’ Forum and Delta State Governor, Ifeanyi Okowa, said as of 1963, the state had not been created.

The governor, who spoke through his Chief Press Secretary, Olise Ifeajika, stated, “Yes, Mr President directed the AGF to dig out a gazette of 1963 which marked out cattle routes across the country.

“Delta State has no such law because the 1963 gazette he talked about does not in exist in the state.”

On Buhari’s support for open grazing, Okowa said whether the President backed it or not, the governors in the South had made their position on the ban on open grazing known and nothing would change it. “We stand by our resolutions,” he stated

Show us grazing route in Ondo, if it exists, Akeredolu’s aide tells FG

Also, the Ondo State Government said it was oblivious of the existence of any grazing route in the state, adding that it stood by the southern governors’ ban on open grazing, despite Buhari’s support for it.

The Special Adviser to the state Governor on Agriculture and Agric-business, Mr Akin Olotu, in an interview with The PUNCH, said cattle routes were not known to be existing in the state.

He said, “We don’t know about any grazing routes in this state, and if they have them in their records, let them show us. I think events have taken over such things now. What I mean is that, that time they were talking about what was the population of the country? Now Ikere Ekiti and Ado are almost one. Akure is almost joined with Owo. Akure and Ondo are almost merged.

Similarly, when contacted, the Attorney-General and Commissioner for Justice in the state, Mr Charles Titiloye, said he was not aware of any gazette which marked out grazing route in the state.

On open grazing, the state government said it still stood by the decision of the southern governors, which banned it.

The Special Adviser to the state Governor on Security Matters, Alhaji Jimoh Dojumo, who spoke to one of our correspondents, said the state would not allow open grazing of cattle in the state in spite of the pronouncement of the President.

He said, “The Southern Governors’ Forum has spoken at the meeting in Asaba (Delta State). They(the governors) have banned open grazing in the South. They even issued communiqué on the matter. That is where we stand in Ondo State.

“There is no going back on the ban on open grazing, no land would be given for open grazing or grazing routes for cattle in our state.”

On his part, the Cross River State Commissioner for Agriculture, John Okon Owuna, said he was not aware of grazing routes in the state.

“I am not aware if cattle routes exist in the state or a gazette which marks out cattle routes. All I know is that we have the Obudu Cattle Ranch,” the commissioner told The PUNCH.

Ortom, in an interview with journalists, said there was no part of Benue State that was designated as a grazing route.

He stated, “I want people to know that we have a law in place and the law doesn’t breach the Constitution of the Federal Republic of Nigeria. I want to believe that our law is a win-win thing to provide security for the farmers and herdsmen against cattle rustling.”

No grazing routes in Enugu, herders shouldn’t encroach on others’ businesses – Commissioner

The Enugu State Government said that it did not have any gazette on cattle routes.

The state Commissioner for Agriculture, Mr Matthew Idu, who spoke to one of our correspondents in Enugu, said that cattle rearing was a private business.

He stated, “I have not seen such a document on cattle routes, neither has anybody informed me of any.

The Akwa Ibom State Commissioner of Information and Strategy Mr Ini Ememobong, also told The PUNCH that there were no grazing routes in the state.

Senator representing the Osun Central Senatorial District, Dr Ajibola Basiru, in an interview with one of our correspondents on Sunday, said the President lacked legal and constitutional powers to revive the old grazing routes, anywhere in the country.

Basiru, who holds a doctoral degree in Property Law, spoke to one of our correspondents in his capacity as the Senator representing the Osun Central Senatorial District.

Although Basiru is the Spokesperson for the Senate, the Senator said he could not speak in that official capacity because the upper chamber had yet to take a position on the matter.

The lawmaker said he spoke as a Nigerian who is knowledgeable in the area of constitutional law.

Basiru clarified that the issue of grazing routes was not known to the Nigerian constitution and that Buhari did not have any power to direct the implementation of any law that was alien to the country’s legal books.

He explained that the gazette that Buhari was referring to was a product of a decree promulgated in the northern Nigeria in the 1960s.

He argued that the Land Use Act, which is recognised by the Nigerian constitution, had rubbished the so-called grazing routes gazette.

The Senate spokesperson specifically stated that the Land Use Act had transferred to state governments, the sole power to legislate on use of land for any purpose, including grazing.

Basiru said it was only governors of the northern part of the country that could individually make laws to identify grazing routes because the gazette, which Buhari referred to, had become obsolete.

He said, “Nigerians do not need to criticise the President for making that statement, rather, they should find out whether the President had actually been properly advised by his Attorney General and the legal team.

“Nigerians should be concerned over whether the Nigerian President is actually getting the correct legal advice from his Attorney General and the legal team.

There is no federal legislation that the President can implement over such matter.

“The executive powers of the President merely rely on the powers of the National Assembly to make laws, when you look at Section 5 of the Constitution.

“I have painstakingly looked at the laws of the Federation of Nigeria and I did not see a copy of any law that is called federal grazing law, or grazing Act or any other title relating to the issue.

“I am aware that there is a northern Nigerian law on reserve and grazing routes which was promulgated by a 1964 decree by the premier of the defunct northern Nigeria region.

“It is not a federal law unless the legal adviser to Mr President is equating a northern Nigeria law, which is not applicable in the West, Mid-West, and Eastern region or in anywhere in the southern part of Nigeria, to be a federal or a Nigerian law.

“The President does not have the power to implement that law because it is not a federal law.

“The grazing routes law is not a National Assembly law, so there is nothing for the President to implement.

“It is regrettable that the President has not been properly advised by his Attorney General and the legal team.

“If anybody will implement any law, it is the states where those routes are applicable that could do so.

“It is unfortunate when we have a situation whereby the President of Nigeria is being misadvised by his legal and policy team, for whatever reason it is.

“There has been informed legal opinion on this issue. So there is no federal law regarding grazing routes.

“Even by the allocation of power, under the Nigerian legislation, the National Assembly and by virtue of that, the President does not have power to do anything about grazing routes.

“This is because the management of land in the entire territory of a state, by Section one of the Land Use Act, is vested in the governor.”