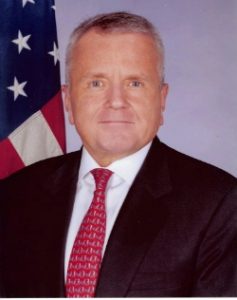 United States Deputy Secretary of State, John Sullivan, will be visiting Nigeria from  November 19 to 20.

The  Public Affairs Section, United States Diplomatic Mission to Nigeria, in a statement made available to Sunday Sun in Abuja, said during the visit, Sullivan will lead the U.S. inter-agency delegation to the Bi-National Commission (BNC) meetings in Abuja.

The Bi-National Commission, according to the US, will be hosted by the Minister of Foreign Affairs,  Geoffrey Onyeama.

“Working groups at the BNC will focus on security cooperation, governance and democracy, as well as economic growth and development.

“The Deputy Secretary is the highest ranking member of the Trump Administration to visit Nigeria and will convey the Administration’s commitment to a strong partnership with the government and people of Nigeria,” the statement read.

Giving a biographical background of Sullivan, the US Diplomatic Mission said Sullivan was confirmed by the U.S. Senate and sworn in as the Deputy Secretary of State on May 24, 2017.

“Prior to assuming his office, Sullivan was a partner in Mayer Brown LLP, and co-chair of the law firm’s national security practice.

“In addition to his decades of experience in private law practice, Mr. Sullivan has served in two prior administrations in senior positions at the Justice, Defense, and Commerce Departments.

“He served until 2009 as the Deputy Secretary of Commerce, following his service from 2005 to 2007 as the General Counsel of the Department.

“Previously, he was appointed Deputy General Counsel of the Defense Department by Secretary Donald H. Rumsfeld.

“A native of Boston, Massachusetts, Deputy Secretary Sullivan received his bachelor’s degree from Brown University and his law degree from the Columbia University School of Law.