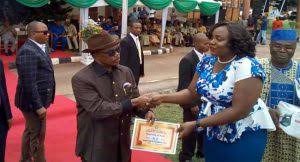 The candidate of the All Progressives Grand Alliance and Governor of Anambra State in yesterday’s governorship election in the state, Chief Willie Obiano, is most likely to win re-election when the final result of the election is announced. Unconfirmed reports at press time indicates that he is leading in 17 out of 21 local government areas in the state

From all indications, the election was a straight fight between the ruling APGA in  the state and the All Progressives Congress  (APC) as early results at the various polling units showed the two parties dominating lead in the results with most of the other 35 parties that entered for the election scoring zero.  In most of the polling units visited by Sunday Sun across the state, APGA was leading with APC trailing behind, while the PDP in some of the places failed to clinch a vote.

Meanwhile, the election witnessed high turnout of voters in virtually all the 21 local government areas of the state under an unprecedented peaceful atmosphere in the history of elections in the state.   However, the election may have thrown up a new trend where political leaders in the state were able to deliver their polling units irrespective of their political parties.   The trend saw the Peoples Democratic Party (PDP) winning in Agulu Ward 2 polling unit 19, Amatutu, of former governor Peter Obi; APC winning in Prince Arthur Eze’s Ukpo Ward 1, Ekwueme Hall polling units and also in Nkwoide Ward 1, Alor of Minister of Labour, Dr Chris Ngige.

However, the political leaders of the APC and PDP had great challenges trying to deliver their wards and polling units as APGA gave them good run for their money in their strongholds.

Governor Willie Obiano, who voted at his Eri Aguleri polling centre at 9:58a.m, said he was impressed by the large turnout of voters across the state.

He noted that the election was peaceful, saying that he was sure of a landslide victory at the end of the day.

He disclosed that as he tried to vote, the card reader could not verify his fingerprint, which he said was later rectified.

In a chat with newsmen at the polling station, the Resident Electoral Commissioner for Jigawa State who was in charge of Anambra East and West local government areas, Prof. Shehu Riskuwa, admitted that they had card readers issues, which he said their technicians were working hard to resolve.

At Otolo Ward 1 in Nnewi North Local Government Area, when the counting of votes began, there was pandemonium as an APC agent tried to snatch the ballot box when he noticed that APGA was leading in the results.

Security agents at the centre intervened and the agent was chased away and the results were declared with APGA winning.

At Umudim Ward 2 Nnewi, where the widow of the late Dim Chukwuemeka Odumegwu-Ojukwu, Ambassador Bianca Ojukwu voted,  APGA swept the polls, dusting the APC that had earlier in the week received Ojukwu’s son, Emeka, to its fold.

Bianca said she was hopeful that APGA would win the election in a landslide, saying that the people had again demonstrated great love for Ojukwu.

Also speaking, Prince Ojinwafor Orizu said that APGA winning in Nnewi was essentially to tell Ojukwu’s son, Emeka, who defected to the APC, that he was alone.

He said that they were still standing on the legacies of the late Ojukwu as encapsulated in APGA.   Former Ohanaeze President General, Dr Dozie Ikedife, whose son is the running mate of Tony Nwoye of the APC, said that the election was peaceful and turnout impressive and was no way affected by the persuasion of the Indigenous People of Biafra  (IPOB) for the people of Anambra State to boycott the election.

Ikedife noted that the new method of simultaneous accreditation and voting adopted by the INEC has greatly improved the electoral process in the country.

Also speaking, former APGA National Chairman, Chief Victor Umeh, who was present when the results of his Aguluzoigbo Ward in Aniocha LGA were announced, said that though the election in the area was peaceful, three card readers deployed to polling units failed, leading to delay in voting.

He thanked the people of the state for coming out to vote en masse and shunning calls by IPOB to boycott the poll, saying that such an action would have been against the state.

Umeh said that APGA has shown superior political power and acceptance by the people who had spoken through the poll.  Also the PDP candidate, Mr. Oseloka Obaze, while speaking to newsmen shortly after casting his vote at his Ochuche Ward 6, countered the views of the APGA chieftains as he claimed that from his monitoring there seemed to be low turnout of voters.

He said: “I chose to wait towards the closing of the accreditation period to vote. I have been busy monitoring the process across the state. Evidently, there seems to be low voter turnout; I don’t know the cause of the apathy. You can explain low turnout in the city because people might have travelled to their villages to vote, but across some of the other places we don’t know why the turnout is low.”

While commending the peaceful process, which he said was gratifying, Obaze lamented that in some places, voting was yet to start as at 12:00 noon.

He said he received reports of vote buying but said he and his campaign organisation were not involved, saying he campaigned vigorously and believed that the people would vote for him because they believe in his mission.

The APGA National Chairman, Chief Victor Oye, commended INEC and the security agencies for the conduct of a peaceful election, noting that with the results he had already received from the polling units, his party, APGA was cruising to victory.

“Here I have a situation room and I get results from every polling unit, not ward, but polling units. As we speak, APGA has won almost all the wards in Anambra State with the exception of two polling units where we lost, like we lost in Amansea, the Igwe’s place, a very narrow winning for APC there. In my own Awka South here, we won all the 20 wards, we lost only one polling unit.

“Generally it is wonderful. I told the press two days ago that I have implicit confidence in the ability of Mammaud Yakubu to organise a free and fair election. Having listened to him during the press briefing he had on Tuesday, I listened to him carefully and I read his lips and I saw the truth in what he was saying.  We went through the materials, for example, some of the security marks will make it impossible for anybody to clone anything, and the ballot papers were varied.

“The security agencies, contrary to people’s trepidation, did very well; nobody was intimidated. They were there just doing their job; they didn’t interfere with even the staff of INEC or the voters. So, I commend the DIG Operations who led the operations. We commend INEC; the Commission will write its name in gold if it conducts the type of election it conducted in Anambra State in 2019 when we have more states to handle,” he said.

Former Presidential Adviser on National Assembly Matters, Senator Joy Emodi, who voted at her Central School polling unit, Odoakpu Ward 2, Onitsha, expressed gratitude to God for a peaceful exercise contrary to the tension that was created in the state, just as she commended the turnout.

Commenting on the exercise, the Police Commissioner on election duty, Mr. Ali Janga, described the conduct of the election as peaceful, noting that the Command had not arrested anyone as at afternoon when he spoke.

Janga, who is the Commissioner of Police, Kogi State said: “It is peaceful, so far so good, no arrest has been made.”

Meanwhile, two persons were arrested by the police at Ofianta Ward 8, Nsugbe, polling unit of the APC candidate, Dr Nwoye for disturbing the voting process.

According to an eyewitness, trouble allegedly started when the Council Chairman, whom they gave his name as Pius Ifeadi, came to the polling unit with some young men suspected to be thugs and went to the electoral officers with his boys but was stopped by the natives.

His boys allegedly refused to leave and fracas ensued, which temporarily stopped the voting until the police arrested the situation and apprehended two of the boys.  However, there was slight apathy in the Onitsha area as voting did not start early in most of the places.

A resident of Onitsha, Mr John Ugah, said that the voter apathy in Onitsha was connected with the IPOB threat and sit-at-home it declared to boycott the election, stressing that many people were afraid to come out due to the fear of the unknown.  “You know that this area is prone to crisis which made some people to stay at home But at the end, nothing happened in the area as anticipated and we thank God for the peaceful election,” Ugah stated.

Also Senator Alphonsus Igbeke, who represented Anambra North Senatorial Zone between 2007 and 2011, commended the INEC for releasing election materials on time for the election.   Speaking with newsmen in Nsugbe, he said he was impressed with the turnout of voters, just as he commended the police for securing the people and electoral materials.

The Interim National Secretary of the Peoples Democratic Party (PDP), Senator Ben Obi, has lost his ward to the All Progressives Grand Alliance (APGA) in yesterday’s Anambra governorship election.

Meanwhile, it was brisk business for the electorate at the three polling stations comprising EC 30 C, EC 30 A, EC 30 B of Oye Market Square III, Awka V, Awka South Local Government Area (LGA), as they pocketed amounts ranging from N500 to N2000 to vote for certian candidates in the election.

Incidentally, the inducements of the voters cut across all the political parties, as they battled to outsmart each other in all the polling stations monitored by Sunday Sun.

The voters were asked to show evidence of the party they voted for before collecting their money. However, those trusted by the agents were given the cash before voting, while certain persons stationed near the polling units had to confirm to the agents that those they were not sure of voted appropriately before they were paid.

Sunday Sun observed that most of the voters had to even bargain for an amount before making up their minds to cast their votes, just as some of the parties pegged their amount at N2,000 from the beginning of voting before reducing it to N1,000 later.

It was also observed that the security agents appeared to be in active connivance with the party agents, as they did nothing to stop the malpractice.

“They said they are giving us N2000 to vote,” some of the voters announced on arrival at the polling stations to attract the attention of the canvassers who would kick-start the bargaining process.

It was also observed that the canvassers, comprising both men and young ladies, pocketed N2000 for convincing any electorate and confirming that he or she voted accordingly. Canvassers who ran out of cash were seen making frantic telephone calls to their principals to supply more cash.

All the polling stations in Ezi Umuogbu, Awka, the parties virtually turned the station into a market place as the inducement was done with impunity.   Fielding questions from Sunday Sun after casting his vote at 11.50am, the Interim National Secretary of the PDP, Senator Ben Obi, observed that there was low turnout of voters, blaming it on the massive deployment of security agents, which he said, intimidated the electorate.

Obi, whose fingerprint was initially rejected by the card readers, however, commended the Independent National Electoral Commission (INEC) for improving the voting process especially with the introduction of simultaneous accreditation and voting.    He however, urged the Commission to further improve on the process, saying, “the idea of battling with the card reader was discouraging.”