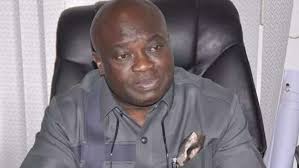 The World Igbo Youth Congress (WIYC), has said that Abia people should not make the mistake of re-electing Governor Okezie Ikpeazu for a second tenure, stating that he has not done anything for Abians to guarantee him a second tenure in office as the Governor the state.

They noted that rather than make concrete efforts towards the development of the State, paying salaries of workers and providing dividends of democracy to Abians he claim to be governing, he has been busy aiding and abetting Biafra agitators.

According to them, even “civil servants in Abia State have never had it so bad since the return to democracy in 1999, and the man at the saddle at this point in history, appears unready to bring to table any attempt to strategise and make their lives better”.

This is contained in a statement issued by the National Publicity Secretary of WIYC, Mazi Alex Okemiri .

Okemiri said that Ikpeazu has done nothing to guarantee him a second term in office.

“Apart from civil servants, pensioners are also groaning with several months of pension arrears. All these are happening despite the several bailout funds and Paris Club refund, as well as the monthly statutory allocation and internally generated revenue that comes into the state.

“It only shows that the Governor is either insensitive to the plight of workers or lacks the wherewithal to govern Abia State.”

“May we also point out that the state of infrastructure in Abia State has remained everything but pitiable. We get embarrassed each time picture of terrible state of roads in different parts of the state surface on the social media.

Most of the Governor’s aides are even richer than the Governor and Abia, we know that Ikpeazu as a person is a good man with intention to promote made in Aba products, but his aides countermands his policies and procedures for governance, one of his aides on special duties and personal aide from his wife’s village have bought almost all the landed properties in Umuahia and Aba, it appears Ikpeazu lacks the capacity to discipline these aides Who are richer than him, we have no option to drag Ikpeazu’s aides to EFCC with all the evidence against them , for them to refund all the looted funds from Abia treasury”, WIYC alleged.

“We have observed the pains and sadness in the faces of Abia people, we have asked what have the government has done with the borrowed funds which the Abia house of assembly approved for him which runs into billions of Naira, Obingwa people are regretting having their son as Governor, there’s no single road done in Ikpeazu LGA, he has no road to his village, there’s no Youth Empowerment, there’s high rate of crime in Aba, kidnapping has returned to Aba, there’s multiple taxation on traders ,it has taken Ikpeazu 28months to build drainage from  Osisioma junction to Aba main park, a 2kilometres road, yet there’s no hope to complete it, the Igbo Youths decried.

“This has continued because the current administration is not prepared for governance. As such, it will be a disservice to the people to think of re-electing the governor in 2019.

“We believe and indeed urge the people of Abia State to begin the process of searching for a competent hand that would pull the state out of the doldrums of poverty and bag governance. Time has come for the good people of Abia state to do away with god-fatherism. We have seen the adverse effects and cannot continue in such a manner”, we hereby declare Abia Government house vacant, and warn PDP to replace Ikpeazu or be ready to lose Abia State Government house for the first time since 1999 to APC or APGA ,APC /APGA should field candidates from Abia South, to beat PDP if they field Ikpeazu at last the group concluded.

It could be re-called that same group had few days ago accused Ikpeazu and Senator Enyinnaya Abaribe of plotting the escape of Mazi Nnamdi Kanu, the leader of the Indigenous People of Biafra, IPOB and called for the immediate arrest of Abaribe.