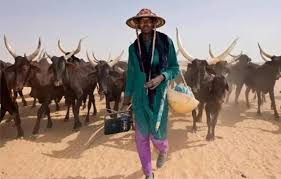 He, then, cautioned them not to deploy much energy on the laws, adding that it would take time for it to materialise.

The governor of Kaduna State, Nasir El-Rufai, has stated that it is difficult to execute the Anti-Open Grazing laws which his counterparts in the Southern part of Nigeria have passed to curb insecurity in the region.

He, then, cautioned them not to deploy much energy on the laws, adding that it would take time for it to materialise.

Speaking during a visit to the headquarters of the All Progressives Congress (APC) on Tuesday, El-Rufai revealed that the Central Bank of Nigeria (CBN) has backed his state with N7.5 billion out of the N10 billion required to build a ranch.

He also disclosed that since there are over 14 grazing reserves in Kaduna State, he would be glad if the Nigerian Government can support his state with N140 billion to develop the grazing reserves.

According to El-Rufai, it is needless for the Southern states’ governors to politicise grazing rights and pass laws they know cannot be implemented.

Speaking on the anti-open grazing laws, he noted, “The northern state governors forum has already taken a position that open grazing is not a sustainable way of livestock production. And we must move towards ranching.

“We have taken a position as northern state governors and we are implementing that.

“And in my state, for instance, we are developing a huge ranch to centralise the herders. And that is the solution, a long time. But can it be done overnight? No.

“This project we are doing will cost us about N10 billion. The CBN is supporting us with about N7.5 billion. And it will take about two years to do. We will be settling about 1,500 Fulani herder families.

“And I hope that they will see that there are alternative ways of producing livestock instead of running up and down with cattle going to people’s farms to cause all kinds of problems. We want to solve the problem.

“What is unhelpful is to politicise the situation and pass legislation that you know that you cannot implement. So, we have taken a position and we are working round the clock to implement that position.

“And these herders emanate from the north and we are going to centralise them. We cannot do it overnight. We need billions of naira. This is just one ranch that is causing 10 billion. I have 14 grazing reserves in Kaduna State and I will like to convert them into ranching. Do I have 14 times 10 billion naira? I don’t have.

“If the Federal Government will give me N140 billion, I will convert the other 13 into ranches and make sure that nobody comes out with a cow or sheep in Kaduna State because I will have enough ranches to take care of everybody. That is the solution. You can legislate but let us wait and see. And I wish them the best of luck.”