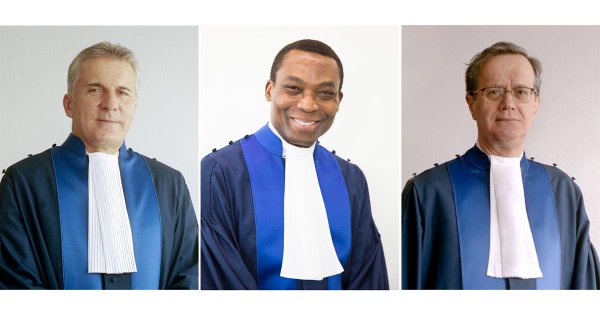 Profile of Judge Chile Eboe-Osuji
• The new president holds an LLB from the University of Calabar, Nigeria (1985), an LLM from McGill University, Canada (1991), and a PhD in international criminal law from the University of Amsterdam, The Netherlands (2011).
• He was elected to ICC in December 16, 2011, thus making him the first judge of Nigerian descent in that Court. He won the office in the fifteenth ballot in the Assembly of States Parties with 102 votes.
• He has taught international criminal law as an adjunct professor at the Faculty of Law of the University of Ottawa, Canada, and has an extensive record of legal scholarship and publications.
• Judge Eboe-Osuji served as a legal expert to Nigeria’s delegation to the ICC-ASP Special Working Group on the Definition of the Crime of Aggression and practised law as a barrister, appearing in many criminal, civil and constitutional cases before national courts in Nigeria and Canada.
• Prior to joining the ICC, Judge Eboe-Osuji was the Legal Advisor to the UN High Commissioner for Human Rights, during which time he led the writing of submissions to the European Court of Human Rights and the United States Supreme Court.
• He also served as the Principal Appeals Counsel for the Prosecution in the Charles Taylor Case at the Special Court for Sierra Leone (2007-2008) and has held several posts at the International Criminal Tribunal for Rwanda, including Head of Chambers (2008-2010) and Lead Prosecution Trial Counsel (2000-2003).
The International Criminal Court (ICC) was established on 17 July 1998, by a conference of 160 States which established the first treaty-based permanent international criminal court. The treaty adopted during that conference is known as the Rome Statute of the International Criminal Court.

The court investigates and, where warranted, tries individuals charged with the gravest crimes of concern to the international community: genocide, war crimes, crimes against humanity and the crime of aggression. Several individuals have been indicted by the ICC which includes President Omar al-Bashir of Sudan and the Former Ivorian President Laurent Gbagbo, and his wife Simone.

Here are other important things to know about Eboe-Osuji.

1. Eboe-Osuji was born and had his first degree in Nigeria. Eboe-Osuji studied law at the University of Calabar (LL.B) and was called to bar in 1986. He practised briefly in the country before going to McGill University, Montreal Canada for his LL.M and University of Amsterdam, the Netherlands for doctoral degree in laws.
2. From 1997 to 2005, Eboe-Osuji served as a counsel and senior legal officer to judges at the International Criminal Tribunal for Rwanda (ICTR).
3. After this engagement, he returned to Canada and continue his private law practise.
4. In 2005, he appointed to work for the Special Court for Sierra Leone and also returned to the ICTR to work as a legal officer from 2008 to 2010. The United Nations High Commissioner for Human Rights (UNCHR) appointed him a legal advisor in 2010. This position he held until his appointment as a judge of the ICC on December 16, 2011.
5. Eboe-Osuji is also currently in charge of the genocide case against the Kenyan President, Uhuru Kenyatta at the ICC.