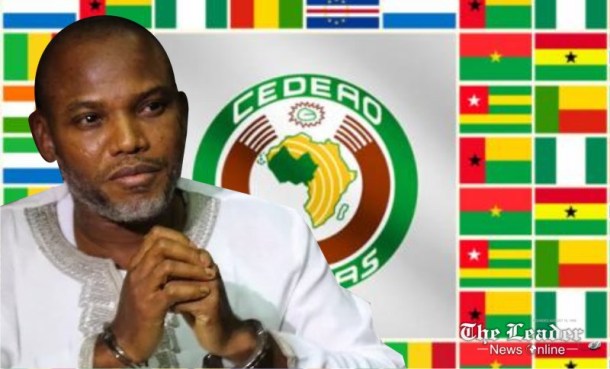 An ECOWAS court sitting in Abuja, has dismissed an application filed by the Muhammadu Buhari-led government asking that the suit filed by the Nnamdi Kanu, the director of Radio Biafra be quashed.
Jubilation has erupted among members of Radio Biafra faction of IPOB  led by Nnamdi Kanu and those sympathetic to his plight, following this report.
Kanu’s suit seeks the court to grant him an unconditional release from detention as well as damages to the tune of $800 million.
According to Channels TV, the Nigerian government asked the court to dismiss the case because it is a subject matter before a federal court and the appeal court.
The government’s counsel had argued that, Kanu’s application constitutes an abuse of court process.
The presiding judge, Micah Wright-Williams, dismissed the application of the government for lacking in merit.
The court said it has the jurisdiction to hear cases of infringement of human rights.