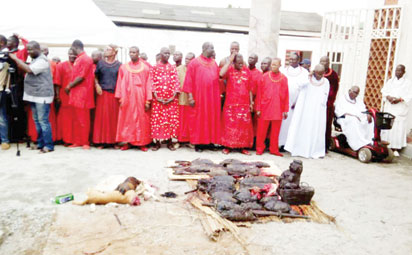 BENIN—MYSTERIOUS deaths has hit Iguomon village in Uhunmwode Local Government Area of Edo State, following curses placed on the community by the Oba of Benin for flaunting his orders.

The curses, Vanguard gathered, was necessitated by the disobedience and perversion of native norms by the former officials of the outlawed Community Development Association, CDA, in the village, who flouted the orders of the Benin monarch.

The inhabitants of the village, who besieged the palace of Oba Ewuare II in tears yesterday, appealing for a revocation of the curses placed on Iguomon community. They also claimed that mysterious deaths, strange diseases, attacks of various kinds as well as untold afflictions have been ravaging the community shortly after the curses were placed. Spokesman and Secretary to the community, Mr. Joseph Ighodaro, said they were at the palace to appeal to the monarch as the supreme traditional authority in the state to revoke all the curses placed on Iguomon village by his ancestors.

He stated that the people of the village were ready to carry out all the necessary rites needed for the revocation of the curses. They also pleaded with monarch to consider Mr. Roland Okhuarobo as the rightful Odionwere of Iguomon village, just as they promised to refrain from all forms of violation of traditional norms to avoid further premature deaths and disasters.

Buhari has Handed Over Nigeria to Terrorists- Deji