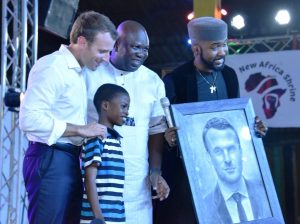 French President, Emmanuel Macron, has urged Africans to evolve ways of generating a new set of leaders who will take the continent to greater heights.

He said the future of Africa and the task of making it great rest with Africans.

Macron spoke on Tuesday, when he visited the Afrika Shrine, Agidingbi, Ikeja, home of the late Afrobeat legend, Fela Anikulapo Kuti, during an event tagged ‘Celebration of African Culture’ to inaugurate the African Cultural Season 2020,

Accompanied by Lagos State Governor, Akinwunmi Ambode, Macron described the shrine as an iconic centre for the propagation of African culture, strength and music.

The French president, who said he was glad to be back to the Afrika Shrine, since his first visit in 2002, which he still holds fond memories, said only Nigerians can change their image in the comity of nations.

“I am very happy to be here. Let me remind you that this place (Shrine) is a music place as well as for politics, which is needed to change the society, and the youths have a crucial role to play.

“Africa needs a new generation of Africans to share the new narrative about Africa all over the world. Politics is important because it is a tool to change the society. So, I will say to the youths, politics is important, be involved,” he said.

“It will include people with fashion, African movies, new generation of artistes will be coming from Africa and it will be organised by them to show Europe and France, the real culture of Africa.

“The event will be financed by African leaders. It will not be sponsored by France or European businesses, but by African businesses, it is brand new. This season is a unique one and it will be the new face of Africa in Europe, organised by Africans, providing what you like and what you have here,” he said.

Earlier, Ambode while welcoming Macron to the state, expressed optimism that the historic visit will go a long way to break any barrier between Nigeria and France as well as foster greater collaboration for economic, social and cultural growth.

He said the government is delighted to host Macron, a well respected global leader, adding that it would also signal a new era between both countries, especially for Lagos, where talents in the arts and creative industry abound.

“On behalf of the government and good people of Lagos State, I welcome President Macron to the commercial and cultural capital of Nigeria and, indeed, West Africa.

Obi, who spoke as one of the dignitaries who received the French president at Fela’s Shrine in Ikeja on Tuesday, said he was on the same page with Macron, that for the country to witness the type of political renaissance needed for growth, the youths must ensure they elect only people with track records in management of people and resources.

Reviewing the visit of the French president, Obi described it as a clear evidence that Nigeria still holds a lot of promises among the international communities in spite of its challenges.