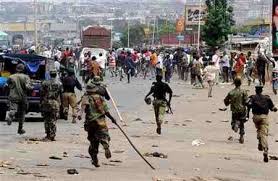 No fewer than 23 persons were reportedly killed, on Monday night, by suspected Fulani herdsmen in Dundu village of Kwal District of Bassa Local Government Area of Plateau State.

Daily Sun gathered that the attack which occurred at about 7pm on Monday at Dundu village of Kwal, left several houses burnt and scores injured, all who are now receiving medical treatment at Enos Hospital Miango.

A youths leader, who gave his name as Lowrance Timothy, said 23 corpses had been counted and more were still being recover from the bush as the villagers were fleeing for safety.

“The suspected Fulani herdsmen stormed the village at about 7pm when people were preparing for dinner. Children and women including men who keep vigil in the community were taken unaware and killed 23 persons while several others were injured and houses burnt with foodstuff.”

Police Public Relation Officer of the Plateau State Police Command,  ASP Tyopev Marthias Terna, confirmed the ugly incident and said he does not have detail of the casualty.

He pledged to call the DPO of Bassa Local Government Area to get details and communicate our reporter as soon as possible.

Meanwhile, Irigwe women from Miango District of Bassa Local Government Area on Tuesday took over the major streets in the famous terminus market, Ahmadu Bello Way, Tafawa Balewa Street and Gada-Buyu road in Jos to protest the killing of women and children during the attacks in Miango villages.

The women protested to the  mortuary of the temporary sit of the Jos University Teaching Hospital (JUTH), where five corpses of children ages between 12 and 17 years deposited after they were attacked and killed from mining site by suspects herdsmen.

The women who dressed in black attires, carrying leafs  and plea cards to register their displeasure over the reoccurring episodes of killings in Miango communities, returned more devastated from the mortuary when the news of the killing of over 23 persons was broken.

It could be recalled that Plateau State Governor, Simon Lalong, gave a marching order to the security  agents in the state to immediately arrest and prosecute the criminals that perpetrated killings in various communities.

In a statement by Commissioner for Information and Communication, Yakubu Dati, said the state will not condone the activities of hoodlums who take advantage of conflicts among citizens to perpetrate killings and destruction of property in the name of ethnic crisis.

He warned that the state will not fold its arms and watch the enemies of Plateau take us back to the dark old days when citizens distrust one another, adding that “we must emphasize on the great values that unite us as a people.”